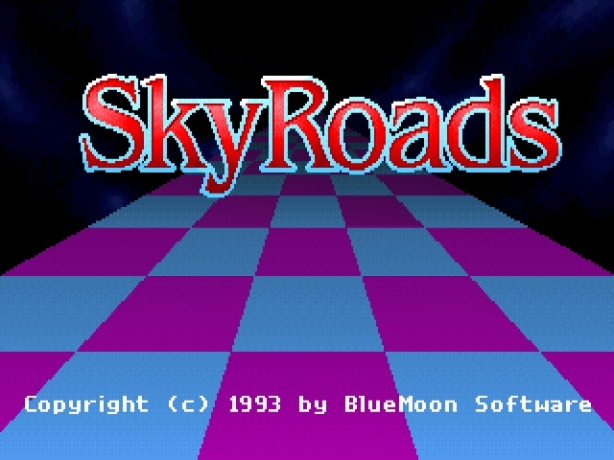 SkyRoads is the polished and better graphically redered version of the first estonian game who saw the light in the very early 90’s, Kosmonaut. After three months of development it has been released in a shareware versione, with the full version purchaseable only through Blue Moon Interactive. I had exactly the shareware version and I played the entire game only with the beginning of the new century when has become widely available.

Sometimes when people gets bored or annoyed they take playing cards and start a siolitaire. Or in more modern times they play Solitaire on PS, or piball, or Mahjongg or somethig similar. Otherwise if you are old enough to have seen a 286 PC you could have played SkyRoads. It’s not a game to lose your mind onto. But when outside is cloudy and gloomy you can pass some different 10 miuntes. And maybe can even happen that you get caught by the game until you’ll finish it…

SkyRoads has almost no splash screen. We only see the “terrain” forming while the menu appears (a veri scheletric menu…) Plus nobody seem to have paid attention to be a bit alluring with the intro. What a pity…

The graphics are very “canonical” Barely sufficient. In the immortal words of my high school principal: “If the bar is 10ft. high you’ll jump 10 ft and a quarter of inch” (actually he said everything in italian and used meters, not feet but is the same concept…). The fact is that SkyRoads was a “light” game, distributed shareware so we cannot expect it to be a milestone…

The game is very easy: you control a small spacecraft that you have to drive on a sort of space platform to reach the end of the stage. The platform, obviously, is not a straight simple road, but is full of perils, like walls, holes etc…

The different colors of the paths correspond to different properties of them:

The levels are very short so, especially for the first ones, you’ll complete them in a heartbeat.

On the dashboard of the spacecraft you can see some indicators: one for the fuel, on for the oxygen, one on the left that shows you the % of the level you already completed.

We can only hear a very slight background music and the sound of the spacecraft hitting the pavements. So basically SkyRoads has no sound. But the fleeing backgroung is quite good. A bit dark but not the worst I’ve heard…

SkyRoads features 10 “worlds” each one with 3 levels, giving a total of 30 different scenarios. Each one is very easy to beat (in most of the cases) so if you plan to play SkyRoads until you complete it you don’t have to stay on the chair for so long. However the longevity os not a key factor, since I don’t think nobory ever thought to beat SkyRoads: all the people who played it (or at least people I know who played it) did it only as a pastime, so 10-15 minutes maximum. In this lapse of time SkyRoads accomplish his job perfectly.

If you liked you can also try: