My loved magazine Retro Gamer in 2004 ranked Bubble Bobble in 12th place in the list of  best games of all-time higlighting especially the wonderful sound department.

First of all the 1-Minute MAME Mini Movie where you can see me playing Bubble Bobble!

Bubble Bobble has been relased during the August of 1986 therefore is 30 years old. The protagonists are two small dragons or dinosaurs with the possibility to spit bubbles.

The thing most of the people don’t know is that they were humans before being transformed in dragons by the evil Baron Von Blubba who kidnapped their girlfriends and force them to wander in the Cave of Monsters for 100 geometrical levels to defeat him.

The caves are populated by different kind of enemies than can be killed trapping them inside the bubbles spitted by the dragons. Once they’re trapped, they can be killed by just colliding with them.

Bubble Bobble is strewn by bonuses and power-ups, being the most famous the fruit that falls into the cave everytime an enemy is killed. Sometimes appears on the screen bubbles with a letter inside with which you can compose the word EXTEND and gain an extra life.

Talkin about all the feature of this game will take an entire day but this is not the place to go in depth, I want you to play the game and discover them by yourself 🙂 (for example have you evaer found the portal?)

This game was ported on almost every kind of console/PC, but I think that the most beautiful port, if not for the game graphics but FOR SURE for the disk/cartridge is the one for the Famicom Disk System: take a look on this picture and tell me you’ve not fallen in love…c’mon try! 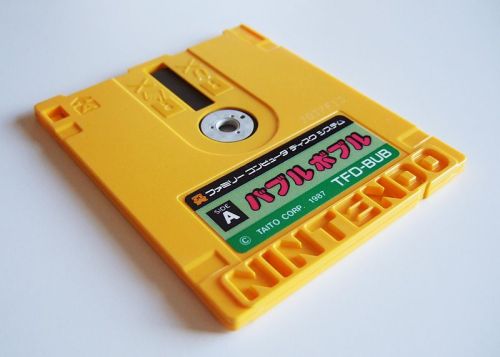 Bubble Bobble was the first game I everd played on an original coin-op upright cabinet, but for a twist of fate it’s the one I’ve never played on computer opr other consoles until I discovered MAME.

Here are some screenshot of the game 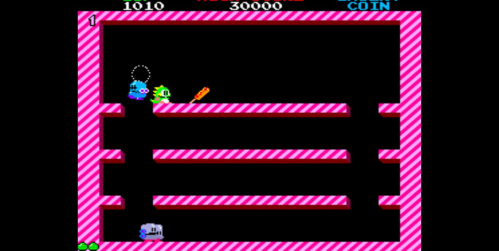 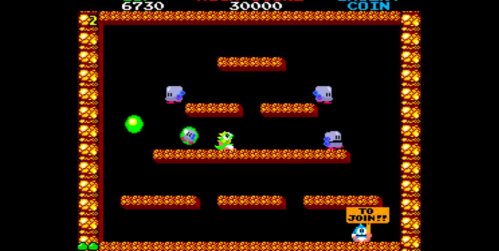 A huge thanks, as always, to the guys of Arcade Museum.

If you liked this game you can also try: