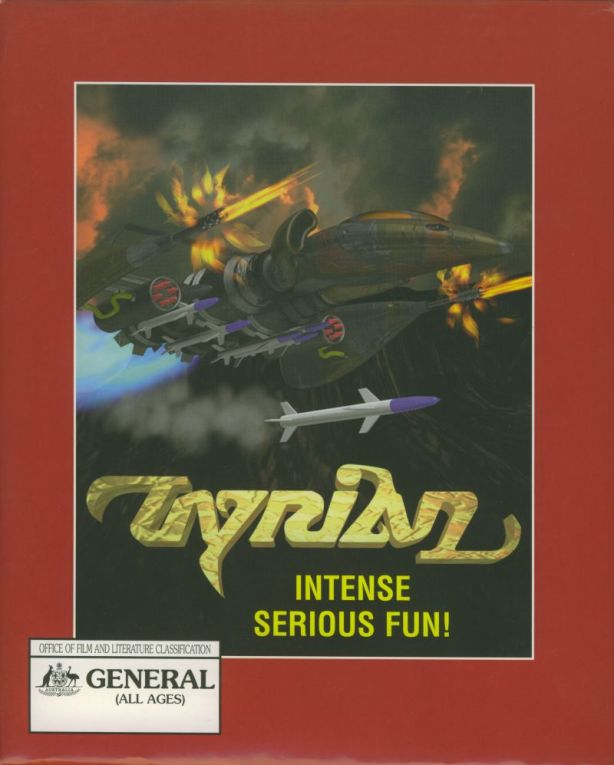 My liason with shoot ’em up games is something quite new. Even though on my PC as a kid I always had some games of this genre is just in the last year that I started to play more seriously space shooters. The first game that comes to my mind is Raptor: Call of the Shadows that is also a reference for the developers of Tyriar, a game that I first played a couple of months ago. I cannot say that one of the two has a soft spot in my heart, but despite being a game “new” to me, I can consider Tyrian an affordable way to have fun blasting aliens and/or enemy spaceships. 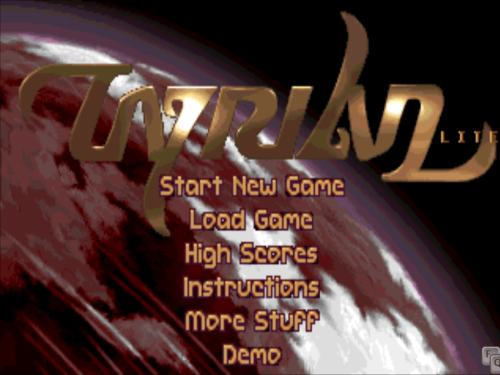 Compared to other shmups of the same years, Tyrian has a more “cartoonish” graphics, rounder and bolder, like the ones you could find in games like Warcraft 2 (that in fact has been released the same year ans Tyrian). The screen sometimes can be a bit of a mess and can be hard to find your ship but overall the visuals are pretty good and the sidebar with all the infos about your status is a nice touch for the game. Even the menus, especially the one where you can upgrade your ship are very well made, in pure mid-90s style.

Do you know? Shoot ’em ups can have a plot! Although the narration is quite linear and predictable, the fact that the developers included a plot in a genre that usually relies on nothing but shooting till your thumbs bleed does them credit. 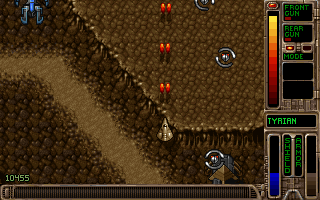 Trent Hawkins is a terraforming pilot and his job is to to scout habitable planets. He approaches Tyrian, which is next to the Hazudra territory, inhabited by a lizad race. Buce, a lizard, is a good friend of Trent and one day he’s shot to death but he has the time to reveal him that everything was ordered by MicroSol a huge corporation willing to expoit the Gravitium, a precious mineral that exists on Tyrian that can control the gravity. Using it as a building material for MicroSol spaceships will make them nearly unstoppable. Buce was the only one to know about it and now Trent is the next target. He must reach the free planet of Savara before MicroSol find him.

Tyrian is a shoot ’em up on steroids. Apart from the usual gameplay based on shooting everything you see, there’s a large array of power-ups that can be purchased between the different missions: missiles, shields, pods and all of the classic equipments of a spaceship in this genre of games.

The game has three difficulty levels, but other three are hidden and unlockable (Impossible, Suicide and Lord of the Game), three episodes and three different modes: Arcade, Story and Two Players. The Story Mode is the standard and follows the narration, making the various levels not just a standalone challenge against horde of enemies but a particular moment in the story of the game. In this version the ship can be upgraded buying the enhancements between the missions. The arcade mode is more classic, and the power-ups comes in bubbles after defeating the enemeies. As a tradition in the shmups, even in Tyrian every level has a final boss, and they become harder to defeat as you progress through the game.

As much of the games of the genre, even Tyrian uses a limited number ok keys to move the spaceship and shoot: cursor keys and an action key. One tricky thing about the game is that the playing field is larger than the width of the screen, so you can move farther on the left and on the right; during the scrolling, all of the projectiles seems like they are distorted, even though is just an illusion caused by the camera tha moves but sometimes can be difficult to predict the pattern, especially in the latter levels where the amount of lead (and asteroids) make the game a real hell to play.

Alexander Brandon is credited for the music in Tyrian. Having worked in other Epic games, Brandon can be defined a company maestro and even this time his tunes are perfectly tailored on the game, both for the music in game and the menu sounds.

I suck in completing video games so my opinion could be a bit biased but Tyrian is a rather long and challenging game. Having three (plus other impossible three) difficulty level even the more skilled players can  find a reason to play it again and test their abilities and their nerves.

From the same developer:

From the same developer: