May has been a really juicy month, no only because I’ve bought some games especially in the first half of the month, but even because I’ve finally received a lot of games I had bought in April and they were terribly late.

So this time let’s start with the newer games, so with the Xbox 360. I’ve bought two games for it, Minecraft and Street Fighter X Tekken. Minecraft has been on my radar for a long time and it’s one of those games I’m scared to play because I know it could take my time and my soul 🙂 Street Fighter X Tekken instead will be a great pastime for my gf and I since she loves beat ’em ups and she used to play a lot Tekken 3 with her brother when she was younger. I’m an old fart so I’m more on Street Fighter and I think most of our summer evenings will begin with a quick punch and kick session.

I’ve also bought two games for PC: Magic Carpet has been a constant during my youth and I remember playing it because it was one of the games featured on my Dutch Flyer. I’ve never played Simon the Sorcerer II but I did enjoy the first game, a pure LucasArts point and click that was great fun.

Now back to my first love, the NES. This month I’ve been able to get five games, but unfortunately none of them is a masterpiece. For sure the best one in the bunch is Batman, in its american version (I have to confess that the european label is 1000 time better…), but I’m also happy to have secured a copy of Defender 2 and, as it always happen, I still don’t own the first one. the cartridge is not in perfect condition and I’ll have to work to remove the stickers on it but the game works fine and that’s the importanti thing. Gyruss and Low G Man are two fillers in my collection with the first more up my alley even though I still need some time to get used to the perspective used in the game. James Bond Jr. instead is a lucky addition and I’ve bouoght it mainly for the cartoon that was on air when I was a kind and I used to watch it. I don’t know why but I fell I’ll be a bit disappointed by the game… 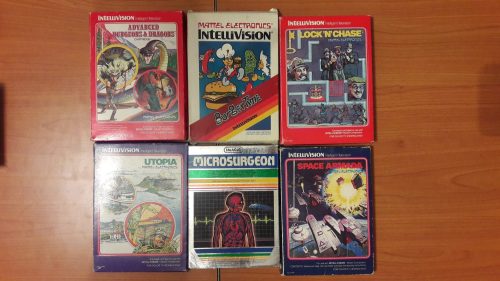 The bunch of games that stand out in the lot this time are the Intellivision ones. I’ve finally secured an original Intlelivision that sits now beside the IntV III I’ve bought last year. Technically the consoles are equal but I wasn’t felling good having the third and not the first. With the console for a totla of 60€ came some games, all boxed. Advanced Dungeons and Dragon is the second hald of the mini-series on the Intellivision I was still missing (I only had Treasure of Tarmin) and Burgertime is a very appreciated game because it was one of the first I’ve tried years ago (via emulation) and I wanted to try it on the real thing. But of course, if you know me just a bit, you’ll know that the jewel in the crown is Microsurgeon, due to my love for Imagic and for their packaging. The game itself is a liserci dream and I really don’t know how they decided to develop and put on sale somenthing like this. Ah, the good old times when there was no fear to experiment… Another great game in the lot is Utopia, considered one of the first RTS in history. Of course it lack the realism of a true game of this genre but back in 1982 this was the future and I really look forward to try it. The last two games can be considered clones or at leat “heavily inspired” by two of the biggest games of the time: Lock .n Chase is a variation on the Pac-Man theme while Space Armada can be defined a shameless clone of Space Invaders.

The last trache of games include some for the PS1 and some for the PS2. For the first Sony console I’ve bought Atlantis, pushed by my gf, and Spyro, alway pushed by her, since it was one of the games I’ve passed when it came out. Resident Evil Survivor instead was the last game of the series I was missing for the PS1 along with Director’s Cut I still haven’t found at a reasonable price.

For PS2 instead I got two great compilations: I’ve finally got Taito Legends2 and SNK arcade Classics Vol. 1 I was trying to get since months till I’ve finally found it under 30€.

There’s a lot to play even this month. Will I have the time to do it?