Welcome to the twenty-seventh entry of this column in which I review forbidden (and forgotten) retro games with adult contents.

The game is an adult adventure released in 1997 and one of the few games that got an “Adult Only” rating from the ESRB. It was developed and released by Black Dragon Production: this game is their first and last venture in the video games world.

The era of the “free gaming” (to give an analogy with the “free banking era”, but this comparison is rather reckless and out of place) was an, alas, forgotten and wonderful era, when the now called “indie” developers were really indie, with no budget and with a lot of strange ideas. 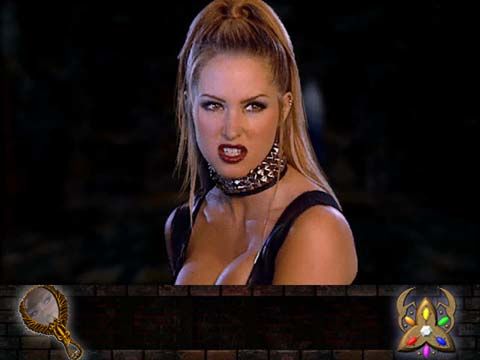 Riana Rouge is part of this “classic” culture and despite the quality of the game, it’s a bit a shame that we’ve lost this amateurish approach to the gaming.

The game stars the playmate Gilliam Bonner and we can hardly believe she’s a shy secretary. In a mix of lisergic game situations (like the pne pictured below) the obvious target of the developer is to show mammary glands and buttocks rarely covered by clothes, even becuse the clothes will put a fantasy B-movie costumes to shame.

This time we have a solid reason to label Riana Rouge as a forbidden games, since it was credited as “Adults Only” from the ESRB. And this is a great “achievement” for an adult or pseudo-adult game, since other games even more adult or almost pornographic never received such a rating (sometimes just because the ESRB didn’t exist when the games was released, as it was for Custer’s Revenge). And if you check online the list of the AO games it features only a small “elite” of titles (you can check it here, although I doubt is a complete list).

Riana Rouge has a strange feel of old 90s websites mixed with a Mortal Kombat-like graphics with digitized sprites. Plus the amount of hot chick, despite in hardly exciting situations, makes the game rather entertaining (of course compared to other games covered in this column) 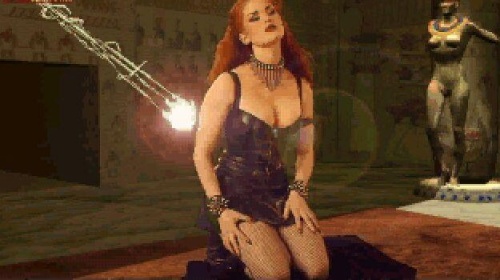 The plot of the game is one of the most out-of-this-world you can imagine. The shy secretary Riana Rouge has just been fired by her boss Frank Virago and before wuitting the job she witnesses him molesting a worker. And as she tries to stop him she got transported into another magical dimesion.

Although not so common, the game shows up from time to time on auction online. Recently a complete copy of the game has been sold in the US for roughly 50€ + shipping, so even if not so cheap, Riana Rouge is not a super expensive games. Of course we can discuss why you should spend 50€ to buy it , but that’s another story…

And finally, if you need other games related to this which are crappy and adult oriented like Riana Rouge, stick around, more games will be covered soon!