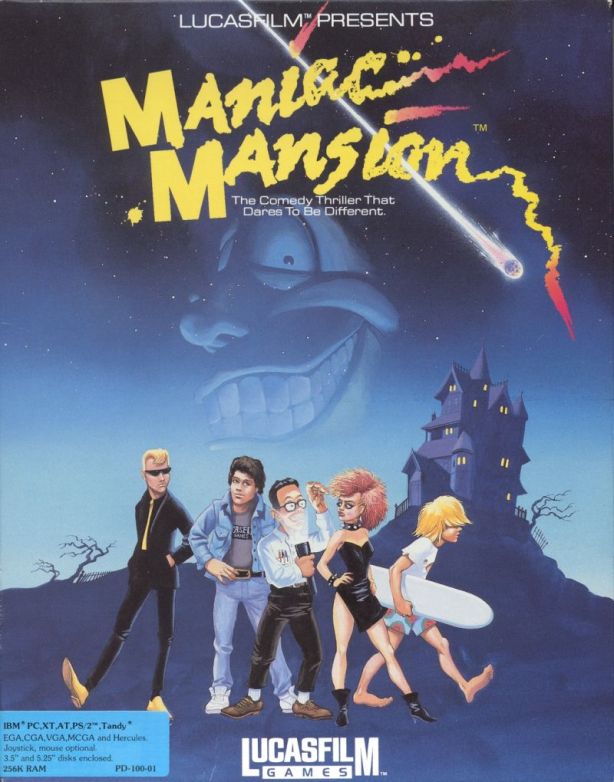 Don’t be a tuna head!

Mi first encounter with Maniac Mansion was through Day of the Tentacle. There’s one room in  which, using a C64-alike, the game can be played while you’re in the middle of DOTT adventure. This version is an enhanced one and makes you play the original title with some graphic improvement. At the time for me it looked like a step back because DOTT was for me the state of the art in fact of graphic adventures and Maniac Mansion was jus an “old” game. Old but not fashionable. Several decades later, now I understand the value of that addiction and I can fully understante the importance of the original Maniac Mansion game that has been like a big bang in the universe of point-and-click adventures. It’s a game that I’ve briefly played in my youth and that I played from time to time in my adulthood. I’ve always played it without fully immerse myself in it until recently when I deciced to play and complete it once and for all. And the result was a great yet short dive in the past.

The game opens up with a screen in which you can select the two companions of Dave. Every character has his/her own “ability”. Except Dave, which is your run-of-the-mill character, there’s the nerd, Bernard, shy but a genius in electronics, there’s the surfer, the fashion victim, the rocker…a sum of all of the best clichées of every low level horror movie. Of course there’s also the black guy…

After the protagonists select screen we have an intro that briefly explain what happened. 20 years before a comet impacted not far away from the Edison mansion and drove them crazy to the point that Fred Edison became obsessed with pseudo-scientific experiments involving humans: Snazy is one of them…

Maniac Mansion has been revolutionary, and not only for its genre.No adventure before was so colourful and gloomy at the same time (of course with a decent EGA graphic card) and back in the 80s with a good computer the scrooling was extremely smooth. The level of detail is impressive for a 1987 game. An enhanced version was released in 1988 and the “definitive” version is the one that can be found in the sequel Day of the Tentacleuning the computer in the room of Weird Ed Edison,

The plot of Maniac Mansion is highly influenced by some of the most famous horror B-movies (but not only B-movies, it’s easy to find references to “The Texas Chainsaw Massacre”) and by the teen-horror genre, still in its embryonic phase in the late 80s. The key elements of the genre are there: a mad scientist, an isolated mansion full of perils and gory stuff, a damsel in peril, kidnapped by the scientist for his experiments, blood and a fistful of young men who came to rescue her.

The story revolves around the kidnapping of Sandy Pantz by Dr. Fred Edison. His boyfriend, Dave Miller, along with two friends (selectable from a pool of six) reach the mansion in which the girl is convicted and they try to rescue her, avoiding Dr. Edison himself, his wife Edna and their son “Weird” Ed. All of the events are caused by the impact of a mysterious comet, happened 20 years before, that made the Edison crazy and turned them into deadly killers. In the mansion lives also a couple of Tentacles, Green, pacific, and the evil Violet. Around them, LucasArts will build their following adventure, Day of the Tentacle.

Instead of typing commands with the parser, Lucasfilms developed an intuitive point-and-click interface (hence the name of the subgenre) that made use of the mouse, allowing for an easier gameplay experience. The player can click on the action he wants to perform and then on the item he needs to use, speeding up the action itself and without trying many times only because the parser expect to receive a specific verb.

The mansion of the Edisons is designed as a maze with three floors and an attic not immediately reachable. The player needs to collect keys and variosu items and to solve some puzzles (sometimes less easy that what it seems). Even this time the irony and the grotesque vein of the game force the player to think out of the box and, for example, to feed the Green Tentacle you have to give him some wax fruit (and no, the paint remover is not  one of hjis favourite drinks…). As you proceed with the game you’ll be presented with some more “side quests” that, together, will lead you to the secret lab of Fred Edison and to rescue Sandy.

As it will be for all of the following LucasArts titles, the game is full of irony. There are a lot of references to other adventure, to Lucas films (Star Wars above all, but in the 1990 remake of the game there’s a poster of Zak McKraken and the Aliens Mindbenders). The cross reference between MM and ZMC can be found also in the iconic “usless” item, the chainsaw Dave find in the kitchen of the mansion which can’t be used because is out of fuel. In the Zak McKraken adventure, the protagonist will find some chainsaw fuel and he refuses to pick it up because it’s “for another game”. Another useless item, less visible is Chuck the Plant that will be there also in the sequel Day of the Tentacle and in Indiana Jones and the Fate of Atlantis.

Maniac Mansion represented a breath of fresh air in the adventure genre. Not tied anymore to the rules of the interactive fiction, the characters are easy to move thanks to the mouse support and to perform an action, even if complicated, a couple of clicks are enough. However the innovation wasn’t immediately clear to the critics: in fact, although Maniac Mansion has been voted a “hot game” by Zzap!, they didn’t include it in the adventure genre, reserved at the time to interactive fictions.

This is the only weak point of all the game. It has almost no sound an only a few effects, like the clock ticking. Even if or course having no sound is not a good point in a game, its absence makes the gameplay sometimes even more tense. It would have been better to have a good music score and moments of silent in the most tense part of the game, but you’ll agree with me that having no sound here is not such a big problem.

Even though the game is quite easy and it will take no more than a week (even less) to complete, the fact that the endings are “open”, add a good replay value to the title. Depending on how many friend survive and which one of them you take with you in your adventure, the endigs will be different so you can try to complete the game with different parties. Of course I will never tell you how the different endings are, the only thing you will know from me is that my favourite party is composed by Dave, Bernard and Michael.

From the same developer/publisher: