I’ve first played this game in 2015 and I’ve intensively started played it in 2016 (and I even purchased my own copy last year) and it has been one of the first projects – of many, unfortunately 😦 – I’ve tackled and abandoned on this blog whjile it as still in its very first weeks of age.

I loved the precursor Europa Universalis II and since I found EUIII not so interesting I’ve passed directly to the fourth game, looking for some improved graphics, gameplay and interactivity. Well, all of my wishes have been fulfilled, and EUIV goes directly in the top-10 strategy games I’ve ever played.

If you remember my original review (and if you don’t go and read it 🙂 ) this was the only weak point – although useless considering the kind of game we’re talking about. The intro sequence was rather poor and most of times used to crash (and it was not only a problem with my PC…). Luckily at Paradox they fixed this issue and – again despite being something absolutely useless – they game their game a captivating intro with a long loading screen in which the developers put a lot of useful hints to play the game at its best.

This is another strong point of the game, although not requred. Perhaps is my sould of maps and flags lover but seing a well shaped map of the world with thousands of flags and coat of arms always make my heart melt. You can’t say the graphics are the state of the art for the period, even because such level of detail was absolutely not required, but all of the visuals and the animations are exactly what you need from a game like this.

The base script is already written – we’re dealing again with the period that goes from the XIV to the XIX century with all its vault of significant events that affect the gameplay. But most of times (nay, everytime) the key for a good match is to read between the lines of history and take the right decisions: pushing too hard on war will result irreparably in a sudden defeat, while being too careful will lead you to the historical meaninglessness.

From EU2 to EU4 11 years have passed and, while some games dynamics only needed to be refined and updated because they were already perfect, some aspect of the game needed to be improved but at Paradox they forgot to do all of the homeworks.

One aspects above all they could have surely improved is the period of time considered: they slightly shorteded it from EU2 whan they could have extended it. For sure the option to start even in the early middle ages would have been a nice feature. I’d love to play even a scenario beginning in 3000BC with Sumer but the historical sources are too poor and I understand why this idea is impossible to translate into the game. But the early middle ages, let’s say from the VIII century, even if the documentation is not rich as it is that of the XV century, of course, would have been a great place to start: a lot of documented rulers, kings, people, “nations” to play, at least in Europe. I’d have loved to play as the early emperors of the HRE and try to rule all Europe…On the other hand, the XIX century (of which we have a lot of documents and sources) is completely overlooked and is dense of important events: the turmoils of ’20-’21, ’30-’31, the whole 1848, the imdependence of Italy and Greece, the creation of Germany, american civil war etc…

You can say: “you’re a stupid ignorant, there are other games that cover those periods” and I can say “thanks for the kind words (…) but I’d liove to play a game that covers as many years as possible!”. Actually Paradox implemented some features and you can export your saved data from one game to another so you can play Crusader Kings II and begin a new game in EUIV from the same point where you’ve ended with CKII.

Back to the good things of the game, they improved a lot all of the game mechanics making the game less obscure and clarifying so

me aspects that looked too “random”: for example in EU2 when you were assaulting a castle you didn’t know how it was done, why you succeeded and why not. You know it was something based on a “dice” but you weren’t sure about the mechanics. Now every time you make a decision or you’re performing an action the games explains perfectly what affects what are you doing, how much and why, so you can set up a certain “style” in playing the game. For a newcomer of the genre probably there are even too many informations but that’s what you need when you play a game that rely so much on this features. 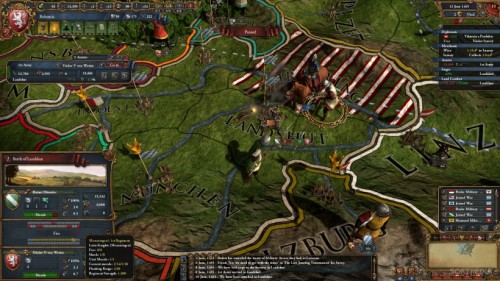 Some aspects of the game, while important, can surely be left uncosidered (almost), like the religious aspect, even though for a “perfect” game you absolutely have to consider even this aspect. The game is slow and this is a good thing because there are so many things you have to care about that a game too fast like it was EU2 would have been a shame.

Finding the correct balance between each and every single feature will make you sweat and every match this balance has to be found elsewhere, sicne ebery match is different, even if you’re playing in the same period and with the same kingdom. The key for the game is the balance, and taking things slow. Sometimes during the game you’ll have moments in which you have “nothing to do” (that usually means “I cannot start a war against anybody”) and those are the key moments of the game, since you have to treasure these moments to reorganize your kingdom, build structures, get the best advisors, push on the diplomacy, choose wisely the next steps you have to take in the next 50 years and so on.

Of course my go-to match is choosing one of the kingdoms of northern Italy and try to unify all of the peninsula: luckily I did it at the first try using Venice (the easiest of the many available) as you can read from my – alas interrupted – playthrough. I did it at first try but don’t think it’s so easy! I’ve matured so many hours of experience (and I know history quite well to foresee what’s going to happen, guinding my strategy accordingly) that I’m skilled enough to play a good game without risking too much.

Protip: if you have an old and slow computer playing EU IV could be a pain in the ass. But if your computer is a decend one, not the old piece of tin I’m writing this post on, the gaming experience will be good. You just need to get to grips with the menus because sometimes could be difficilt to find what you’re looking for because depending on what window you have opened, clicking on the same point on the map will give different results. But apart from this if you’re a fan of strategy games you know there are a lot of things to manage so you should be skilled enough to browse in the game interface,

The only flaw in an otherwise perfect game. While EU2 had a magnificient music score, surely chosen by someone who know what he was doing and with great variety, EU4 dramatically lacks on this side. Don’t get me wrong, you always have a background music and sound effects, but the music in EU2 is waaaaay better.

Once you got this game you can play it until you’re old: this is one of the games you will put back on the shelf once you PC dies or become too old to be powered up. There are endless games available, hundreds of kingdoms, thousands of decisions, units, buildings and strategies, a lot of expansions and DLCs that fix or improve some part of the game. This is one of the games that last forever. Like Tetris, but a bit more advanced 🙂

This time EU4 turns out to be slightly better than EU2 and that’s a reason behind it: EU4 is far more advanced, more sophisticated and more “real” than EU2 that on the other hand owns a big piece of my heart since I dedicated to this game really too many hours of my life: I’ve played almost every king of nation available at least once. It’s true, EU2 is actually a “copy” of the original EU, and I usually tend to give better grades to the older game in case of a “tie”, but having never played EU, my “original” game is EU2.  EU4 is so better than its forefather that would have been disrespectful to give it a lower grade – but a higher one would have been disrespectful to other games that got more than 91/100.