And happy new year again to all of you!

Here we are again to another post of the [Picks of the Month] column. December has been a quite calm month and I managed not to spend all of the money I’ve saved. In fact most of the stuff I got have been Christmas presents, beginning with the most appreciated one, the Nintendo Switch.

This is the Mario Kart 8 Deluxe version and is the one with the couloured Joy-Con (way better that the traditional grey ones…). It looks like a console easier to pick up and play than the other ones, probably because it can be used as an handheld and therefore is more intuitive and more “immediate”. Oh, and if you want to add me let me know, I’m always keen to a MK8 match 🙂

The only “old” game I’ve bought this month is a copy of Ace Combat 3 for the PS1 in a second hand shop near home for like 5€. It’s funny how I’ve only played the first game of the series and I keep finding all of the remaining titles I’ve never played…so now I still miss the first one to complete the trilogy.

The remaining games are more modern. Starting with the PS3, I’ve found some good deals at CEX here in my town and I’ve bought ST5 Academy Edition, since I’ve always loved GT and it’s one of the games I’ve played the most during the univerity times along with PES, Wolfenstein – The New Order that I still haven’t played (the only one I’ve put my hands onto was the first Wolfenstein 3D for PC but I’m very curious to see how the story evolved in the last 25 years) and Resident Evil 5 which I already had for Xbox 360 and Xbox One (so now I have the complete Xbox trilogy). 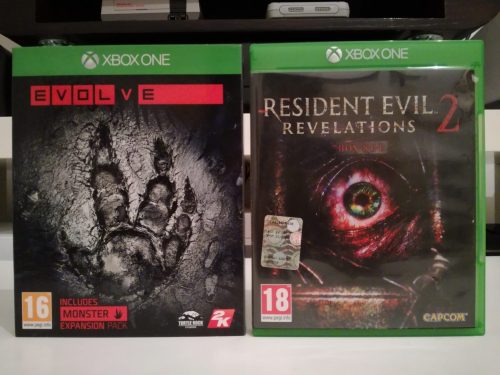 Talking about Xbox, I also got three games for the Xbox One. The first is, of course, another Resident Evil games, one fo the few I still miss for the console, Resident Evil Revelations 2, then I’ve bough for 1€ Evolve (I really don’t know what kind of games is but you know I’m always ready to buy some 1€-games) and Cuphead.

I’ve  bought the digital copy of Cuphead yesterday night because I still haven’t donated myself anything for Christmas. It was discounte on Microsoft Store and it came for 15€ and giving the fact that it’s a games I was drooling onto even before I got the Xbox One I though it was time to finally get it.