Welcome to the twenty-first entry of this column in which I review forbidden (and forgotten) retro games with adult contents.

Today’s game is Elvira: Mistress of the Dark.

For non-US gamers like I am Elvira is just one of the many horror-themed adventures, but since the titular character, played by Cassandra Peterson, ran a quite popular show in the US, for my transoceanic readers this game is like a movie-themed title.

The games was developed by Horrorsoft, a label owned by Adventure Soft (founded as Adventure International) that, after Elvira, released also the sequel Jaws of Cerberus in 1991 and WaxWorks in 1992. The distribution was handled by the well-known Accolade, that has in its titles roster games like Ace of Aces (1986), the first Test Drive (1987), the Hardball series (from 1989), the summer and winter edition of The Games (1991 and 1992) and Bubsy 2 (1994).

The game was ported with various consoles and computer, namely Amiga, Atari ST, Commodore 64 and MS-DOS and all of them got very positive reviews that went from 81% of ZZap! 64 to 93% of Zero.

If I have to be frank, this time we’re not talking about a particularly forgotten/forbidden game. It is actually the opposite. Elvira won the prize as 1991 Best RPG assingned by Computer Gaming World and ZZap! named is as one of ther “hot games” for C64.

My first experience with this game has been through my version of Dutch Flyer and I’ve been intrigued not only by the funny gameplay but even by the sinuosity of Elvira herself. Something definitely not to miss 😉

Cassandra Peterson could have easily been one of the wet dreams of the horror audience back in the late 80s and the game tries (when it can) to emphatize the killer body of Elvira. And that’s not the end, since it pushed quite hard also on some gory images like the one here below. 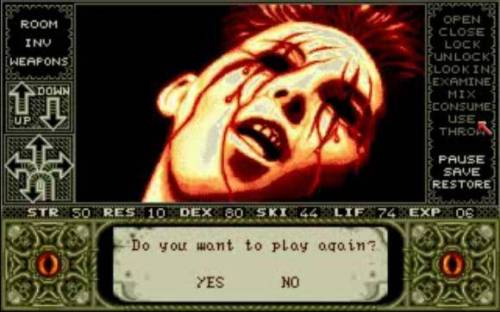 Elvira is a funny and interesting adventure RPG à la Ultima Underworld: The Stygian Abyss or Shadowgate, to give you an idea and the gameplay is tried-and-tested, easy to pick and not too difficult to handle for non RPG-ists

A good boxed MS-DOS copy could set you back, since you have to pay next to 100€, while the other version are very hard to find and I suppose the prices could be even higher. However, if you don’t wat to play by the rules, you can easily download the game for free, but I’m not here to sponsor piracy 😉

And finally, if you need other games related to this which are crappy and adult oriented like Elvira: Mistress of the Dark, stick around, more games will be covered soon!