Welcome to the eighteenth entry of this column in which I review forbidden (and forgotten) retro games with adult contents.

The developer is Team Ninja, the company that’s beind the DOA games, the reboots of Ninja Gaiden for the Xbox and Hyrule Warriors, while the publisher is no less than Tecmo, the famous company that in the heyday od the NES brought to the public some famous sport games like Tecmo Bowl (1989) and Tecmo Baseball (1988) and the later installments such as Soccer, Basketball and Golf, games like Star Force, Rygar and Solomon’s Key (1987), but most important the classic Ninja Gaiden series and, in recent years, the beautiful Fatal Frame/Project Zero series. Tecmo was also behind the relase of the other DOA titles.

The game has never been forgotten, since the main series Dead or Alive is still active and spawned several spin-offs (like the Xtreme sub-series). Of course most of the feminists out there would love to forget this game and that all the people in the world could forget it but we’re fuc***g tough. We do not fogive, we do not forget [Citation needed]. 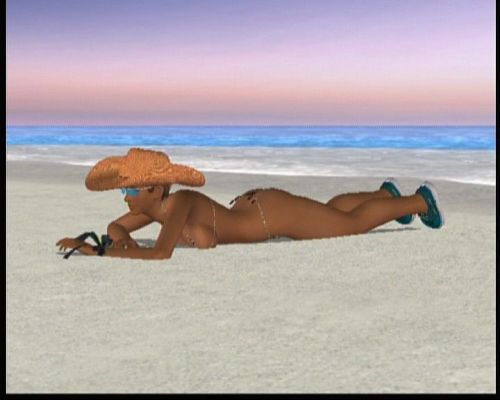 I only have one questions for the people who created the box art for the game. Why at Microsoft they have to enphatize they have the exclusiveon the game? I mean is like bragging that you’re the stinkiest guy in the company!

What’s the basest excuse to put boobs in video games? Take a fighting game where the combat aspect is eclipsed by the curves of the contenders and undress the protagonists to create a beach volley game where the best part of the gameplay is the camera angle that let you see women’s arses.

The biggest “problem” with this title is not the game itself, but the mods created where (take a guess?) you can play with a roster of completely naked players with enhanced butts and inflated boobs.

Even the “clean” verison however received negative critics due to women’s depiction and the voyeurism that permeates the entire game. Apart from the “moral” critics, the technical aspects of the game were well received and the gameplay has always been praised. In Japan the game has been a (relative) smash hit, selling 73000 copies the release day.

Two words: boobs and asses. Actually these are not two things exactly *funny*, they’re mostly exciting things but they’re the only things that make this game interesting.

The game is quite “new” hence a complete copy cas be secured for a few euros/dollars. Since it’s a sort of spin off of a famous series started in 1996 whose last installment, Dead or Alive 5, has been released in 2012, it’s quite common to find in a gamer collection, even though I doubt it’s one of the games that is played the most…

Let’s try to be a bit more serious this time:

And finally, if you need other games related to this which are crappy and adult oriented like Dead or Alive Xtreme Beach Volleyball, stick around, more games will be covered soon!