It was just lasw week when I said that I wanted to focus my collection on three main subjects (“modern” consoles, Resident Evil games and NES cartridges) and I’ve just given myself away.

While I was reading tons of listing and ads online I stumbled upon an italian guy who was selling a small lot of IntelliVision games. I’ve never tried, owned nor even touched an Intellivision and I didn’t know almost anything about the games especially their value. However I was kept away by the pictures and, as frequently happens I placed a bid. After a few days waiting for the auction to be over without even raising too much my bidding price I won and for 40€, so less than 2€ per cartridge I got myself a new bunch of games, the first for a 2nd generation console after the lot I’ve bought last year for the Atari 2600.

Even though during its lifespan the Intellivision sold roughly 3 millions units and its library is very limited if compared to that of 2600 (less than 120 titles VS more than 700) the better capabilities of Mattel console created some little hassle to Atari and its aging 2600 and the Intellivision can be considered the runner-up in the list of the best console of the 2nd generation.

Plus, the limited library and the relatively cheap catalogue, makes this console quite easily collectable since there are only a fistful of games REALLY expensive; on the other hand the most common games, even when boxed demand cheap prices online.

As soon as I’ve received the cartridges I immediately give them a brief clean because they were absolutely filthy and they smelled like old cellar. Some good old alcohol helped me to remove all the curd on them and 90% of the smell. Some of the stickers and labels were a bit damaged and I could only try to fix them better as I could but apart from this everything looked in working order.

Unfortunately I still not have the console to test them so this bunch of games is like a mistery box but usually is difficult that a cartridge game is really broken; most of time a good clean of the contacts solves the problem.

Regarding the titles I checked online where, if I have to be frank, I’ve found very few informations regarding value and history of the games: there’s no AtariAge-like website for Intellivision games so I had to stick with what I’ve found. As I imagined most of the games I’ve bought are quite common so considering the price paid of less that 2€ per cartirdge let’s say that I haven’t gained nor lost anything, but a few of the games are just a bit more valuable. 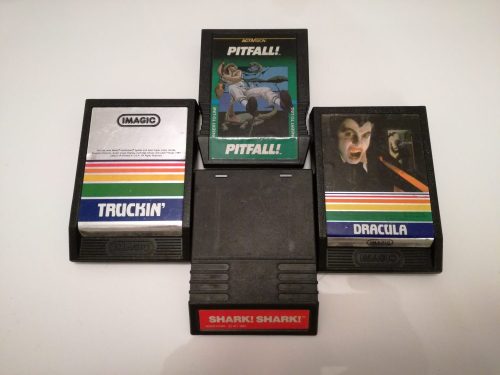 Among them I’m happy to cite the two Imagic titles Truckin’ and Dracula that can be found loose at a price that varies between 15 and 25€. As you may know Imagic is one of the companies I love the most when we talk about early 80s console, especially for the care they put in the packaging. Other two just slightly more valuable games are Shark! Shark! and Pitfall so let’s say that with the 4 games I’ve cited I could easily repay all the others I’ve bought.

I’m very curious to try Activion’s Pitfall as it was one of the 2-3 best games on the Atari 2600 and sold millions and millions of copies and I want to see if they managed to improve this already closed-to-perfection masterpiece (for the times).

The bottom line, with the blue labeled cartridges, include some of the “classic” Intellivision games, the sport games. Now sport games are probably the cheapest ones and you find them for every kind of console in discount bins and they are included in almost every auction you see online because they release them year after year almost with no changes except new players and teams so they quicky become old and unwanted. However when Mattel released the Intellivision, they were among the first if not the first big company to feature sport games with a graphic that was astonishing for the times so even though the games are common they have an intrinsic value considering the time they came out.

I’m very pleased to see in the lot Advanced Dungeons & Dragons: Treasure of Tarmin not just because is one of the first AD&D game ever realeased on console but because the gameplay although diffentent from the classic RPG, is more similar to that of a maze game with an incredible (for the time) 3D effect and I can’t wait to try it. Looking some images online looks very similar to 3D Monster Maze for the ZX81 although, of course, visually hyper improved.

Another small quirk is represented by the two Horse Racing cartridges. Far be it from me to be an horse racing lover I’m curious to find the differences between the two version because, even this time, the internet doesn’t help that much. All I’ve happened to find is that the “official” version ins the green labeled (made in Hong Kong, as far as I can tell) and has been released in 1980 so I don’t really know what kind of version is the white one that only says “1979”. Any kind of help will be very much appreciated.

Now it’s time for me to find a working Intellivision so I’m crossing my fingers!