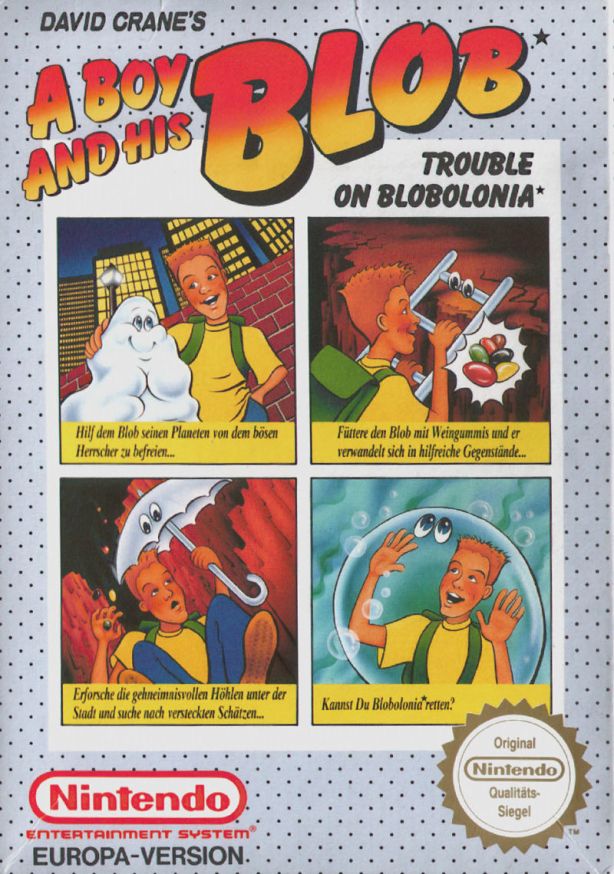 I don’t know if it’s just me but the splash screen along with the soundtrack you can hear looks like a Indiana Jones homage (or maybe “copy”) gone wrong. Even the way the title is written reminds a lot aour famous archaeologist. Apart from this is cool that the opening screen is not black but a fun shade of yellow-orange!

The game is a platformer in which our human protagonist has to solve some simple but tricky puzzles with the help of Blobert. The first one are quite easy but I’m 99% sure that soon you’ll be stuck at a point from which you cannot go further. Blobert can help the titular boy eating Jelly Beans with which he is able to modify his body and assume different shapes.

A total of 14 Jelly Beans are available in the game, each one with their effects on Blobert:

For a strange twist of fate in this game, created by the same person who developed Pitfall!, the first game featuring a jumping character, the boy of the title can’t jump. I don’t know if this can be considered a big limitation, since the game flows naturally anyway, but watching someone jumping in a platform is always relieving. In this game the human player can control only the boy and he can only run, thow jelly belly at his blob and whistle at him.  The controls are quite intuitive, even the button select so choose the jelly bean taste. In the end rather straightforward controls.

Even though as I said the intro sound looks a lot like Indiana Jones score, the in game music is different and even if is in a never changing loop throughout all the game is amusing and not so dangerous for your ears like some other repetitive soundtracks in other games.

The game is not so easy so it’s very unlikely you’ll bet it quickly so it can assure hours and hours of play.