During the years I’ve elaborated a sort of rule that it prove to be right in the 99% of cases based on empirical evidences: “When they make a videogame out of a successfull movie/TV franchise, it’s likely to be very bad”. Unfortunately the rule applies even to The Little Mermaid, even though the videogame is not THAT bad, or at least is not bad as other conversions, like The Dukes of Hazzard or E.T., of which however I’ll talk about in the future…

This is one of the NTSC-exclusive games and I could play it after I modded my NES to turn it region-free (here’s what I’ve done) and was kindly donated by Van Rockingham from Games Revisited. Since he wanted nothing from me for the game the least I could do was write a review!

That was a really appreciated idea and I hope some of you will follow his footsteps, I’m always open to new games! 🙂 🙂 🙂

When The Little Mermaid came out I was in my pre-teens and the huge commercial success led my parents to buy the VHS. I’ve never been a huge Disney fan and I liked most the short WB cartoons (Speedy Gonzalez, Daffy Duck, Wile E. Coyote and so on) so I’m not one that worship every single Disney Classic. However I remember I cried as a fountain when Ariel was voiceless in the cartoon (I’ve never guessed why, though) but these intense feelings were uncomparable with what I felt playing the game: almost nothing… 😦

Disney movies-based videogames, especially the ones made by Capcom has some great intro screens and The Little Mermaid is no less. Not only the splash sceen remind us of the good old times when we were young and we trusted the endless love tale between two people so different, but also serves as an introduction to the game, since it explains the story behind it.

The graphics of this games are pretty much the same of the other Capcom platformers released for the NES: they’re very similar to the ones of Chip ‘n Dale, TaleSpin and Darkwing Duck but less detailed than DuckTales, probably the best Capcom platformer of the 8-bit era. Sometimes the scenarios can be too repetitive, but luckily we even see some moments outside the sea and in Ursula’s castle that relax a bit our eyes turned blue from looking to the ocean depths. 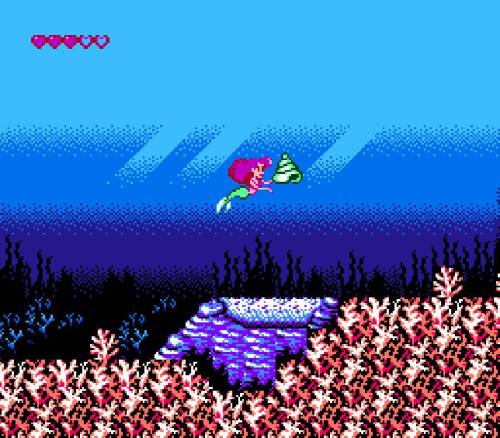 What’s better description than the one we read in the intro?

Ariel, Princess of the Sea, fell in love with Eric at first sight. She asked Ursula to make her human so she could meet him. He fell in love with her too and planned to marry her. Then onoe day Sebastian, Flounder and Scuttle came to see Arien in a big hurry: they explained that Ursula had cast a spell over the fish of the sea so they would have to do what she wanted. If she wasn’t stopped, she would probably take over the whole sea. Ariel decided to go to Ursula’s castle to try and release the fish from Ursula’s spell. she expplained to Eric that she was a mermaid and a Princess of the Sea and that she must try to save her frineds. Eric tried to convince her not to go but she turned back into a mermaid, dove into the sea and began to swim towardas Ursula’s castle.

Unfortunately the gamepleay is 3/4 dull and 1/4 repetitive. The various levels are poor, with only a few enemies easy to fight and there are no particular challenges. Ariel itself has a very limited range of actions: swim, trowing deadly bubbles from her ass (or with her mermaid tail, for all those who don’t like to think about a mermaid farting) and carry seashells or frozen enemies to throw or use as a “shield”. Every often, Ariel can find a vault containing different “bubbles” that reward her with extra points and after a few screens she meets the level boss: end of the level.

There are a few things that make this game dull: first of all is slow. Too damn slow. Ok, we are under the sea, so everithing moves slower but when even the useless action, like throwing a barrel becomes really boring you would only like to reach the end of the level as soon as possible and beat the game, without wasting time in collecting items and bonus.

Talking about the bonuses, Ariel can find tridents and pipes popping the bubbles of enemies inside the cavities in the scenario and the classic hearts that restore the health.

Another annoying thing: the boss battles are way too easy. seriously, with almost no effort you can smash one by one all the bosses without losing a single HP. Even the last boss, Ursula, which shows up twice (the second time in her giant form) as we’ve seen in a lot of platformers (the boss is never defeated the first time…) is quite easy to challenge and with a bit of practice can be defeated easily.

I don’t know how to judge the controls: the game is slow and the controls are a bit delayed because we’re under the sea or Capcom just messed with the controls? Let’s say that I tend to pick the first option, but I’m not so sure the original idea was this. Sometimes controlling Ariel is a bit diffucult and not because they choose an odd set of controls, but just because it looks like you’re trying to move a tank on the ice. Damn, you’re controlling Ariel, she should weight 40 kilos and the sea should be her natural environment!

As my friend Van Rockingham said the intro is a “pretty decent version of Under the Sea”…But unfortunately within the game the music is annoying and even the change of tune during the boss battles is boring. At the end of the level there should be a dramatic music, something that should hinder your progress but this is not the case: just a music with a bit of rhythm and nothing more.

The game features only six levels but the problem is not the quantity but the quality: they’re so easy and sometimes dull that even a newbie that has never played the game or even never played NES, can beat the game in half a day, becoming very skilled in one hour more or less. Sincerely I expect more from a platformer…The game is so repetitive that is almost difficult to arrive at the end: you’d like to press POWER at the end of first level.