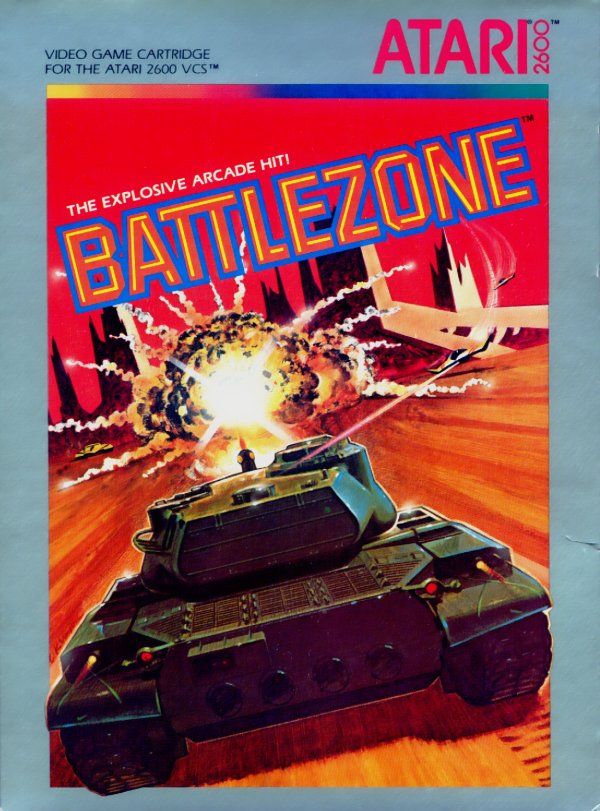 The tanks combat games are some of the earliest games developed and for sure Battlezone is one of the most important among them. Released first on Aracade and later ported on Atari 2600 it’s a descendant of Tank (1974) even if the direct son of the 70s game is Combat, always for Atari 2600. The arcade game was a big hit and, baside the notable 2600 version, was ported also on Atari 5200, on Apple II, VIC-20, C64, ZX Spectrum, Atari XE/GS, Atari ST and MS-DOS.

Battlezone is one of the games I purchased along with the Atari 2600 several months ago. This was actually the first item I’ve bought to enter my collection so I can say my collector like begun with this. And among all the games I’v found in the lot, Battlezone is probably one of the best. Considering that we are talking of a 40 years old console, a game like this with pseudo-3D graphics, even if it’s a poor port of the original arcade game, is always impressive.

This is a bona fide grade since Battlezone has no splash screen. So instead of giving a N.C. I though to give a neutral 7/10

Since it was impossible for the capabilities of the Atari 2600 to port an accurate version of the arcade Battlezone with vector graphics, Atari moved to a raster graphics. The outcome  was great anyway and Battlezone cas be remembered for the deatiled (backthen) visuals and even for the pseudo-3D effects such as the enlargement and shrinkage of the incoming tanks depending on the distance. Even the effect of your tank being hit is remarkable, since the explosion is rendered like it was an error of the graphic card. Have a look!

There’s nothing special to say. You’re in the middle of a battlefield with your tank and you have to shoot other tanks and avoid their bullets. So, same grade as for the Splash screen

The gameplay of Battlezone is very basic and reflect that of the Arcade. You maneuver a tank with a first person perspective on a large plain and you have to shoot at other tanks and xxx to gain some extra point. In this you’ll be helped by a radar displayed on the right of what it looks like an HUD ante litteram indicating where are the other tanks. The most difficult part is, clearly, avoid enemy bullets that are actually quite slow but extremely dangereous and deadly and almost impossible to dodge. You are free to make 360 degrees movement but is quite complicated to understand whether you’re moving or not (mainly because even a real tank is very slow), so it can be hard to run away from a danger zone. Moreover if a tank strikes at you while on your back is 100% sure you’ll be hit.

The Atari VCS has never been a great machine for the sounds, however Battlezone features some notable music effects: first of all the sound of the tank when is destroyed which is perfectly made and could have been used without any problem even for a 90s game.

While being a rather easy game, Battlezone is someway still fun to play and ensure a great replayability. However the purists of the Arcade version will find this port goofy and far from the original but for all the other that played this only on 2600 it has still a kind of appeal.