Nazi agents are about to get their hands of a weapon more dangerous than the atom bomb. Only Indy can stop them before they unleash the deadly secret that sank Atlantis.

Released during the Golden Era of Graphic Adventures, Indiana Jones and the Fate of Atlantis deserves for sure a place in the Olympus. Developed in almost two years by LucasArts, the company that gave to the world the conversion of some of the greatest movies ever made (obviously made by George Lucas) such as Star Wars and Indiana Jones itself and great adventures such as Monkey Island and The Dig, IJ is based on an original script and is just one of the many games based on the most famous archaeologist: the first one, Raider os the Lost Ark was released in 1982 for Atari 2600, then there was 1985 arcade Indiana Jones and the Temple of Doom and 1989 PC game Indiana Jones and the Last Crusade: The Action Game just to cite three of the group.

A franchise that never gets old.

If a game makes you cry for joy you know it’s the right game. I can’t explain what this game has meant to me throughout my childhood and teenage years. It’s by far one of the games I’m most attached to, maybe even more than Super Mario for which I harbor an insane passion. It was my  loyal companion during the cold winter days and during hot summer days and my best pastime when I was alone.

In the end THE Game.

A dark attic, full of old and dusty statues, a vault sealed with chains, columns with gargoyles engraved and then suddently the game title that pops up along with the super famous Indiana Jones score. What do you want more from an opening scene? Plus the intro sequence is interactive since to start the proper game the player have to explore the environment in a series of cutscenes interrupted by the credits. Absolutely 10/10

You may find Indy very very similar to other games of the same genre and same developer, like Maniac Mansion: Day of the Tentale, Sam and Max hit the Road or Monkey Island 2: Le Chuck’s Revenge. And they actually ARE very similar if not identical. Even though usually I rate 10/10 only the first chapter of a series of games that share the same feature (and technically Monkey Island 2 precedes Indiana Jones) I can’t help but give another 10 even to this immense game. Yes, there are no innovations in comparison with MI2 but I don’t think you’ll blame for this. The visual department if IJ is simply perfect. Pixellous yes, as it has to be in early 90s, but just because of this, is astonishing wonderful.

The first times I played this game I wasn’t properly a big fan of Indiana Jones movie but I quickly changed my mind. What I wanted to do more than else was to watch the movie from which the game was inspired. Only years and years after I discovered that the plot on Indiana Jones and the Fate of Atlantis was an original one. WHY GEORGE LUCAS HAS NEVER THOUGHT TO MAKE A MOVIE WITH THIS PLOT??? Really it’s awesome! It’s smoething you would expect from a high grossing movie!

The story is set in 1939. Mr. Smith and Indiana Jones are looking for a mysterious statue in the Barnet College. When they find it, Smith opens it and finds inside a small pearl, then pulls out his gun against Indy and flees with the artifact. Indiana discovers that Smith is actually a former third reich agent, interested in a mysterious excavation in Iceland. Fearing that the ex archaeologist now turned in an appreciated medium Sophia Hapgood might be Kernel next target, Indy flies to New York to warn her. 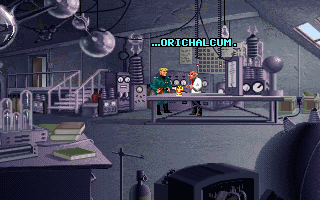 Here starts the two archaeologists adventure. I don’t want to tell you so much because really the plot is incredibly well written so it would be a crime for me to spoil it all.

On the gameplay side Indiana Jones and the Fate of Atlantis is a rather straightfoward point and click advenure, like other LucasArts ones with wich shares the same kind of graphics and the same engline, the SCUMM, originally created for Maniac Mansion (another string to LucasArts bow). However there are a few things that distinguish this game from other point-and-clicks. In one of the very first scenes, Indy faces a bouncer and the tone he will use during this conversation will address the game style througout all the game. There are three different paths: Wits, Fists and Team.

As in all LucasArts graphic advenbtures, the story is puzzle-solving oriented. Indy will meet a lot of different characters (and yes, Mr. Costa is by far the best of them all!) in every corner of the world until the burden of Atlantis itself. Even if IJ features a good dose of humour, its style is less cartoonesque and less fuzzy so even the action Indy has to perform are “intelligent”: we are far from the twisted mechanics of Sam and Max in which you have to think as a crazy child in order to solve some puzzles.

Indy features some of the original sounds of Indiana Jones franchise therefore you can’t help but love it. Even because all the music have that 16-bit style that can’t be forgotten. I trust most of you will undestrand what I’m saying.

High, high, high, high as the sky. You may know I’m not a completist but this is a game I’ve always wanted to complete, dead or alive. And for years I’ve been stuck in the same f*****g point. Me and my old friend Valentina. We were mad about this game and we played it for countless hours, days and months. Probably the game is not the most difficult in the world but trust me when I say that some of the puzzles and riddles will make you crazy.

The story of how I beat this game has to be told. My first encounter with Indy was in 1995. It was one of the first games I had in my 386 (my uncle borrowed me a copy of it). I started to play immediately and I took years to reach let’s say the 50% of the game (even because in the meantime I was playing tons of other games, don’t think I’m so stupid). I gave up thousand times and thousand ond one times I started all over again until my first year in the University. I rented a house with some friends from the high school and one day we decided that Indy had to be beaten once and for all. So we installed the game and started to play at 2 p.m. we easily reached the point where I was stuck since the 90s and we started to rack our brains. After hours of thinking finally we understood the trick and we proceeded straight till the end. When we saw the last screen I started to cry.

It was 5 a.m. We spent 13 hours in a row without eating or drinking (and without going to the bathroom…). But finally we made it. That was one of the most beautiful and at the same time saddest moment of my gamer life, since one of the best games I’ve ever played was suddenly over and the incredible desire to reach the end of it flew away.

Nothing more to say that I haven’t said yet. Indiana Jones and the Fate of Atlantis is a real masterpiece. It’s a game everyone should play at least once in life and I’m 100% sure nobody will be disappointed. Great story, great dialogues, incredible plot, wonderful graphics, everything with the signature of LucasArts. Who could ask for more? This is one of THE Games, which shares the Olympus with other two legends such as Resident Evil and Super Mario Bros. 3.