It’s been a while since I’ve tried (unsuccesfully) to buy a SEGA Master System (obviously the first model) which is one of the the old home consoles still missing in my collection among the major ones, namely NES, SNES, N64, Gamecube on Nintendo side, Master System, Mega Drive, Saturn and Dreamcast on SEGA side then Atari 2600 and PS1 (c’mon even the PS1 starts to be quite old and collectible). Obviously there are many many more beautiful and important consoles out there but I consider these the Magnificent 10.

I was very close to buy one two weeks ago but the model the seller was offering reached a price that was too high for my wallet and I had to pass, even if I pushed myself as further as as I could. Eventually I’ve lost the auction only for one miserable fu***ng pound, so you can imagine how much I sweared.

But every cloud has a silver lining and the same night I found an italian seller (yes, sometimes luckily there are also italians willing to sell good things) who put on sale his complete Master System at the price of 95€ that was way more that I expected to pay for it. The price was negotiable and I offered 60€, waiting for his reply. The morning after, since I haven’t received any answer I thought I had lost the deal but while I was having breakfast he raised to 65€ that was an honest price for me and I immediately confirmed.

While in London I found a Master System for 35£ (so roughly 40€) but it was too scratched and it came only with one controller, power lead and no aerial lead. Considering that the one I bought is in very good conditions, I think I closed a good deal.

I see that online there are a LLLLOT of people selling tons of MS games and I’ve always had to skip those ads since I dind’t have the console. But now nothing can stop me!!! (except my wallet).

The Master System came with all the original cables (power lead, aerial lead, and the TV-console switch) and with two controllers, the classic SMS one AND the control stick (that I saw it was sold spare on eBay for roughly 15€ shipping included if not more) I could use for racing games (Outrun I’m coming!). The console came with the game Hang On pre-installed so even though I still have no cartidges to play, I have anyway a game to get to grips with the Master System. 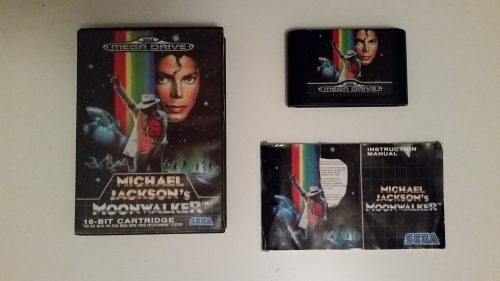 Oh, wait. You thought it was over? No no no! After a few days I started again looking for something interesting and guess what I found? Something that some of you are looking for desperately (kinda of). For the ridiculous sum of 10€ from an italian seller I bought a perfect looking copy of Michael Jackson Moonwalker for the Mega Drive. I know, this is not the Genesis version which is way more expensive, but even the european version is sold around 30€ for a good boxed copy. It came with the original box and manual; however the previous owner (or the one before him) cut Michael Jackson face away for the booklet cover (so in case I’ll have to sell it I’ll consider this without the manual), but since all the other pages are in good conditions I think I made anyway a good deal. I’ve hear so many times about it that now I’m very impatient to play it!

My wallet is crying a bit now so I will stop buying for a while even because April was a rather expensive month for me. Maybe is better to focus on the games I already have for the moment…