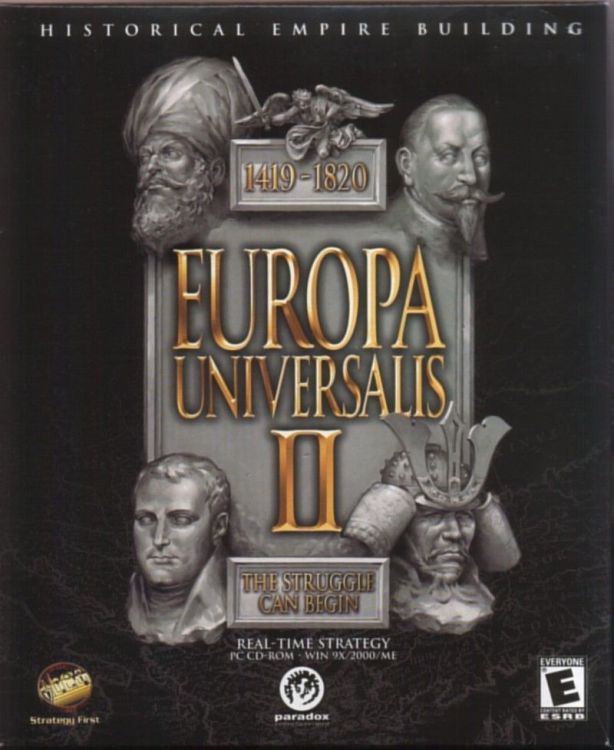 I remember I bought this game slightly after its release date, when I was in high school. As a lover of maps, history and strategy games this was the best thing I could buy. Plus the price was cut of 50% so it was very cheap. It has been love at first sight. I played it for months, nay for years and I think I used almost all of the nations available, even the smallest, even the most forgotten. A game that every strategy and history lovers should have on his shelf.

On this side, Paraqdox should have done better. The intro screen is the same thing we see on the CD cover with a loading bar. Sto. Nothing more. Ok, we don’t have to judge a book by the cover but neither a fan of the maps like me could like a poor intro (even though wee see a wonderful old style Europe map in the background).

However, Paradox had the wonderful idea to put a descripètive intro movie that is something really cool

For sure this is not the main feature in the game and is not something you should look for in a strategy game like this. Although Paradox Entertrainment didn’t push hard in the graphic department, the visuals are good anyway. Yes, the maps are not so detailed, yes, the borders of the nations are a bit gross and yes, sometimes the color combination is a bit awful but in the end, EU2 is still an highly enjoyable game, intersting even to watch. 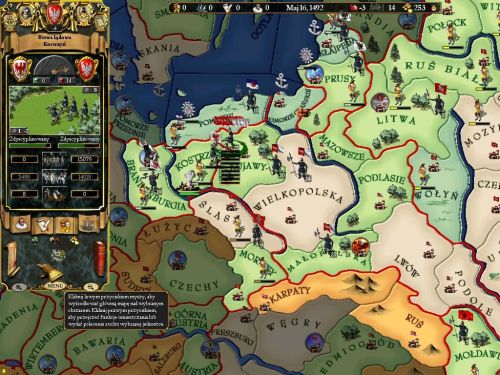 Who said history is boring? With EU2 yoiu can literally re-write the history. Except some importand events that are still present in the game, such as the Tordesillas Treaty, the rise of the Austro-Hungaric Empire, the arrival of Columbus to the spanish court, all the rest is costomizable: the player with its ability and intelligence can shape his empire and enlarge it. Obviously after like 200 years the real map of the world will be very different to your map of the world. But this is the fun aspect!

The goal is easy: take a nation and rule the world.

The number of nations available it’s huge: even an history lover for sure won’t recognize some of the names listed, since, beside the well known european and asian states, there are a lot of african countries, american timebes etc and you can recognize every nation by its flag.

Every state, obviously has its own strenght: if you want to play an easy game you can take Spain, even in in the last part of the game will become a rateher weak state so you have to be wise to save some money and avoid to declare 235876 wars together, even if you could do it; if you’re a tough guy you can choose one of the  small states in Europe, like one of the HRE, but if you’re the Superman of history you could try to take one of the african states: the challenge will be almost impossible! 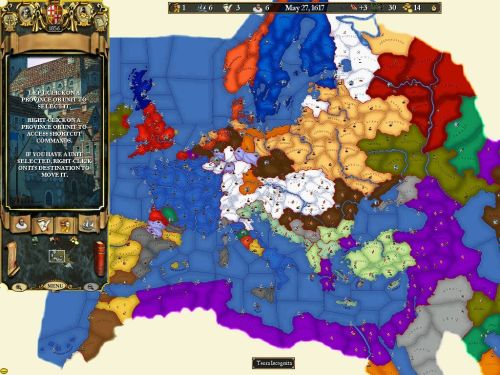 As a ruler you can modify the most important aspect of your nation: you can regulate the taxation, demand for loans, give an orientation to the politics (aristocratic, plutocratic etc…), choose to be a naval power or a land power, build trading posts and colonies and thousand more things. The ruler of each country is the real historical leader of that country in that period and has three parameters that affect his ability: Diplomatic, Administrative and Military power. It’s not necessary to tell you that is always better to declare war, sign a peace or improve the relation with the neighbohors when your king is a great king.

For every coutry there are a lot of fundamental histortical events that happens exactly in the same days it happened historcally and some other events treiggered by a player decision. So for someone that is particulary skilled in history will be easier to identify the right moment to make a treaty or  build a colony, for example.

One of the most important aspect to look after is the Stability that affects almost everything in your nation: the value goes from -3 (infested by rebellions) to +3 (peaceful state) and you have to think very carefully before taking a decision that will lower your stability: a lot of rebels will literally pop out of thin air and you’ll loose precious troops trying to sedate them. On the other side, even when stability is high you have to make a good compromise between war (and expansion) and peacekeeping: if you grow big too quickly the for new provinces will be difficult to accept your authority (so, again revolts) and if you stay always between your borders you’ll never be a big nation and you’ll end up to be a puppet in the hands of the biggest empires. 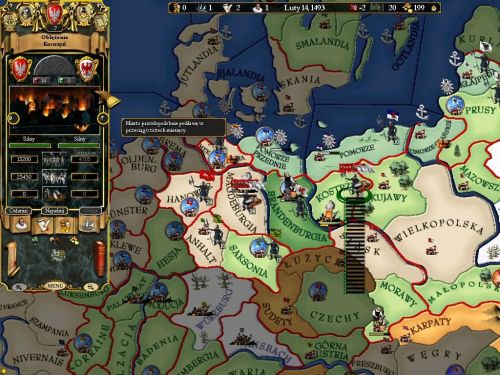 EU2 it’s also a sort of educational game: if you play it with a bit of attention you can get precious notions regarding important historical facts, name of rulers and geopolitical disposition of the various countries. I’ve always loved history but I have to confess that EU2 helped me a lot during the exams in school because I could finally figure out the position of a specific country and hte name of the kings.

Even for me it’s strange to give the maximum score to the sound department but actually I have no reasons to give a grade less than this. EU2 has an impressive background music composed by original and non-original tracks. Every century of the game features a different music so we go from the early Renaissance music to Bach. Maybe it’s because now my ear is more accustomed to hear classic music, since my girfriend is a soprano, but I really loved all the scores of the game. At the point that I selected some of the best tracks to hear when I’m driving in my car! 🙂

Here’s a sample of what you could hear

Impressive, absolutely great. I mean you can write your own history book with every single country in the world and you won’t play two identical games, neither if you play 24h a day for 10 years. Then every game you play you sharpen your ablities, one time you can be oriented on the land, one time on the sea, one time you can be a military empire, another one a diplomatic nation…So in the end a lot of fun!

From the same publisher: