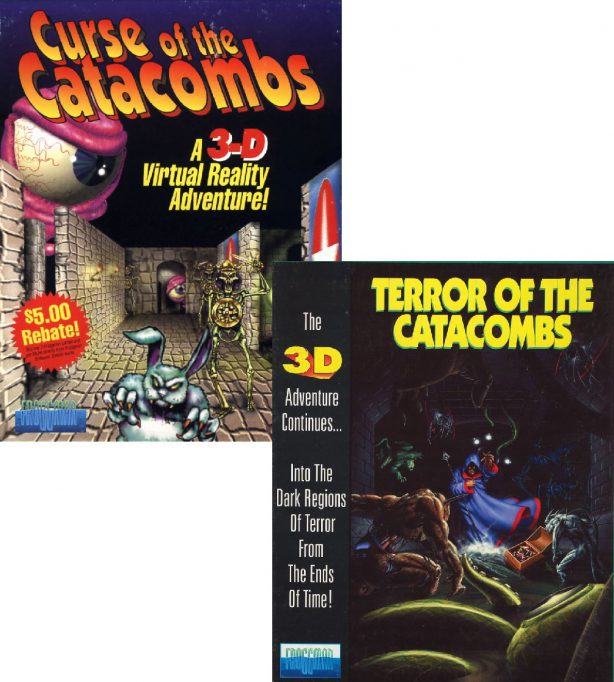 This is game is part of my re-discovery of old games, especially old FPSs, together with Catacombs 3-D, the prevoious chapter that turned 25 a few weeks ago, of which you can read a review here. I won’t talk separately of the three different games, since the similarities are way more than the differences. Being this a shameless copypasta of Catacomb 3-D I can’t help to like it, but right because it’s a pure copy I cannot rate these games as I rated the original game. By the way it’s always enjoyable embody this strange wizard that we can see in a fantasy almost-medieval set and in a modern environment against robots and mechas…

As I already told, this is a shameless copypasta of Cataomb 3-D and the graphics are still the same. Not similar, exactly the same. The problem is that the game industry runs very quickly and to purpose the same game while other companies are releasing games with improved visuals can be dangerous. But in the end this is only a budget game…

Since Catacomb Adventure Series is a shameless copy-paste of the original Catacomb 3-D, the gameplay is essentiall the same. We only have some little improvement in the visual which is always in first person but with more details regarding the status of our protagonist: for example instead of having the compass (highly useless) njow hwe have a useful radar which displays our position but, most important, the position of our enemies. This was the biggest issue of the first chapter because, for the lack of decent sound effects, we couldn’t figure out what was causing our health to drop dramatically; at least now if we are hit we can understand where’s the enemy.

The game is easier than the original, with more potions and more power-ups and is even more “catacombic” since the wide rooms that were the set of Catacomb 3-D are now replaced by narrow and claustrophobic corridors that better express the set we’re in. In this chapter was also removed the tedious inconvenient that occurred in the first game anytime we were against a wall: while in all FPS if you are against a wall but you face left or right you’re anyway able to move (obviously diagonally) in Catacomb 3-D every single time you were against a wall yoiu havre to turn around of 180 degrees or walk in reverse because otherwise you could stay against the wall, unable to move.

Paraphrazing what George Clooney said, “What else?”, I say “Nothing more”, since everything I have to say about Adventure Series is more or less the same as it was in Catacomb 3-D.

Not a big improvement from the original chapter. Only a few more sound effects but nothing new. Hence my grade can’t be more than 5/10

This is the same problem we faced in the original game: it’s too easy and too short. But Catacomb 3-D was at least important for other reason…