All pedestrians have been cleared from the streets; Carmageddon is our only hope

Influenced more than what it seems by Mad Max (the original one, not the remake…) and 1975 cult movie Death Race 2000, Carmageddon is a game that always had to struggle against bans and censorship

When you are upset, angry and you can’t help but punchin’ an idiot face, Carmageddon is the right game. Here kill somebody, smash cars and mock the opponents are the rules. For this, Carmageddon, has always had a bad reputation and was banned in some countries. OK, maybe this could have been too much but for sure this is not a soft game. You’ll be thrown in a spiral of violence and before you can notice you’ll be with your head inside the computer screen aiming at the next pedestrian to kill.

By the way I’ve never suffered the violence of the game (as it was for I think 99,99% of the people who pleyed it) and I’ve never taken my car just to go out and crash it against a wall trying to kill a cow. Carmageddon it’s a gam I always loved especially for the vastiy of the scenarios. I think all of you move the importance of the race in the backgroiund just to explore the world looking for bonuses, power-ups…and pedestrian and cows to kill!

The first screen that appears is the one that we see on the box art: a skinhead-like all in read with the thirst to kill in the eyes. Actually it’s funny because his profile is exactly the same of one of my former roommates during the University years, except for the hair. This reddish color reminds me also the CGA graphics. I’ve always associated CGA and red since I fist played Grand Prix Circuit and tried all the possible graphics cards: CGA with its false color and the abundance of red and violet was quite a vision of hell for me…

But beside this stupid story the developer didn’t put so much attentions on the splash screen; however since the game became a myth this is not an issue.

The graphics are not so detailed and in some occasions (or at least was like this for me) the game suffers a bit especially at the beginning of the race when there are all the cars in one place, contacts, accidents and pedestrians on the street. But again, in my honest opinion what really matters in this game is the crazyness and the hectic gameplay so sincerely we shouldn’t care that much of the lack of good graphics. 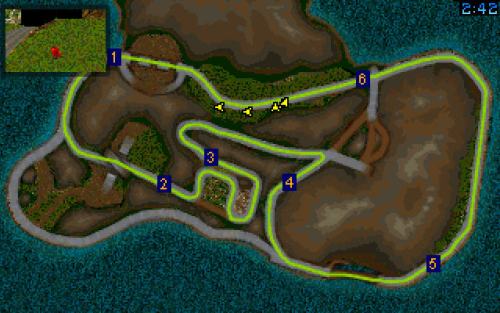 This should be the plotless game in history (drive & kill. Stop), however to calm down the censorship the developers invented a story, always influenced by Death Race 2000 that justified the presence of zombies instead of humans in the cut version.

The year is 2028. Solar flares have contaminated the atmosphere, turning 80% of the world’s population into wandering crowds of evil zombies. In this era of peace, where weapons are a forgotten problem of the past, mankind has only one option – to defend society as we know it IN CARS. All pedestrians have been cleared from the streets; Carmageddon is our only hope.

The fact that they spent some time with this in a game like this do justice to them, and it’s enough for me for an encouragong 6/10.

Carmageddon’s gameplay is hectic. This should be a racing game, or better a car combat game, but it turns out to be a complete mess. But this it’s a good thing about it! I don’t know if it was the same for you (and probably it was) but I don’t remember a single time I raced to reach P1 and try to gain as much advantage as I could on the opponentrs. The only goal EVERY SINGLE TIME was to explore the world looking for power ups and pedestrians to kill (okay this is not so politically correct but I’m STRICTLY talking about the game, not the real life).

In theory the game is about climbing a score from P100 to P1, as it was like the ATP ranking for tennis. You start from the bottom and race after race, victory after victory, (kill after kill) you reach the top meanwhile the races become more and more difficult and the opponents more and more assholes.

You can chose one of the two charcaters, even if this won’t affect the gameplay, Die Anna and Max Damage and then launch your car with a buzz saw crest into the race. 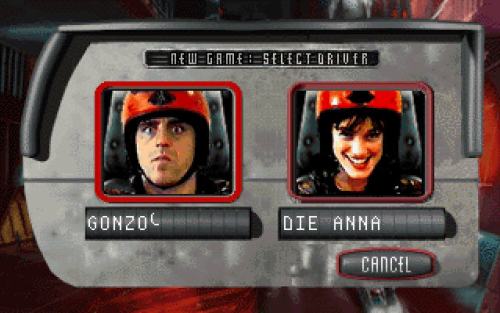 The opponents are 6 and beside trying to win the race, you are secretly tasked to sharpen your killing talent driving aroung the huge set of the race that is way bigger than the classic race track and made possible to the player to explore the whole area. There you can find pedestrian, cows (sometimes) that gives you a juicy bonus score and a lot of different and odd power ups.

During the race you have to pass several checkpoints that guide you through the track and give you additional time and credits. Additional credits can be gained killing people, crashing cars and collecting combos and bonus like “artistic impression”

The main issue for a driver is: WHERE THE F**K IS THE TRACK??? But luckily there’s a map mode in which you can check your position; this is very helpful because 99% of people after the first or second checkpoint starts to go round the city seeking for pedestrian to kill moved only by theirs thirst for blood. By the way driving through the whole set it’s fantastic because you alway find something new and some new hidden interesting places.

The goal is (obviously) finish the race or kill all the pedestrian (almost impossible). Depending in your score your rank will increase by 3-4 points. You car can be pimped a bit with brand new parts, upgrades and cosmetic stuff.

So, beside the racing experience there’s also an important customization feature.

Actually the best part still remains “go and kill”. How many times in racing games the opponents crash youyr car or push you off the track and you have no possibility to seek revenge (it happens to me 95% of times, especially with F1 games…)? Well, Carmageddon was made to solve this problem!

Despite the car sounds are not the best you’ve ever heard (but on the other hand they’re not even the worst) it’s funny to hear the driver screaming and grunting against the opponents or mock the pedestrians with things such as “Shit happens”, “Say a prayer” or “Motherf****r”. Thenk there’s the rocking soundtrack: in the background you can always hear a radio tuned on rock music that cheers you up for the race. And as Alex deLarge in “A Clockwork Orange” said

This would sharpen you up and make you ready for a bit of the old ultra-violence.

Very high. This could be strange for a game in whic every race has only 3-4 laps, but you have to consider the high number of races and especially the vastity of the set of every race with more than 500 pedestrians and tenth of bonuses. You can drive around the city for hours without deeply exploring every inch, so everytime you take a road you’ll discover something new.