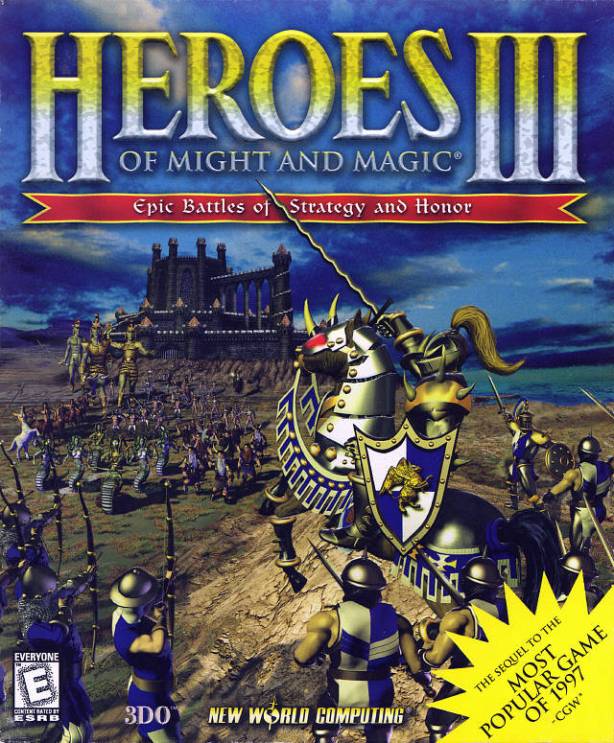 Only a few games have the power to completely catalyze your attention and suck you in their whirlpool until you cannot realize anymore if you’re playing since 10 minutes or 10 hours and which is day of the week. One of these games is Heroes of Might and Magic III (that from now on I will only call HOMM3, sometimes shorter is better).

With this it was love at first sight, from the very first moment I found it in a game compilation and I installed on my PC. I was completely enraptured and I think the first time I played it I spent a whole afternoon until dinner (please notice that italians like me usually in summer tend to dine late in the afternoon, let’s say during the evening, so it was a lot of time!) because I immediately understood the gameplay, the controls, and a draft of strategy.

You cannot be a strategy gamer if you’ve never played HOMM3.

My heart would kill me if I only tried to give HOMM3 less than 10/10. Really it’s so vast, well-made, so excellent that every single number below 10 woul be a blame.

We can divide the graphic department in two areas: the game graphics, we can define as isometric, even if everything is seen from the top, while the real isometric style can be seen while the camera is not on top but in a diagonal position (as in SimCity 2000, for example) and the battle mode graphics in which we have important differences.

The game can be resumed like that: you choose one of the scenariosa or a campaign, then you choose (if you want) the town to rule among the 6 available, the starting hero (if you want) and then you play. The goal is usually to defeat all enemies or acquire a particular artifact. Obviously you have to fight against all the opponents and defeat them in order to beat the scenario.

But from these words you can understand only 1% of the game: behind it there’s strategy, there are tactics, there are monsters to defeat, artifacts to collect, resources to find and be wise enough to balance them all. You cannot focus only on the resources or you’ll lose precious time you could have spent on enlarging your town or upgrading your units. If you put all your efforts powering up your hero without wandering on the map you’ll end up with a great hero, but an alone one that can be easily beaten from 3-4 weaker but coalized opponents.

Here are the basical things you have to master to enjoy at 100% HOMM3:

I don’t want to tell you more than this because since my love for every aspect of this game cannot be contained in this single post, I think in the future I will bother you with some detailed articles. 😉

I said sound but I have to talk mainly about the effects. Every units have their set of effects when it’s attacking, defending, when is hit or is dying. Even the spells have their own effect, even if the best thing related to the spells is the wonderful graphic effect that goes with it.

The game has been released in 1999 and since then is installed on my PC. I’m writing this post during a pause from the game. Is this enough? Ok, I’m an old games lover but a thing is toi love game, another is to play them after more than 15 years as it was the first time. Really an hyper-excellent game!