If you remmber two weeks ago I told you Hyper Sports was the game I broke my fingers onto the most. In the MAME installe in the PC we had in that office there was also another keyboards-crusher game that we usually played A LOT and it was the “father” of Hyper Sports: Track & Field, even known as Hyper Olympics.

This game features the mustachioed Mario cousin, this time struggling with six different dfisciplines, all of them related to athletics (so the name Track & Field). The difficulty level in this game is easier than in the sequel and you’ll easily succeed in beating all of the events. Almost all the events.

Yes, because the only one that can give you some hassles is the high jump, since you have to calibrate carefully all your movements. The events are 100m dash, long jump, javelin, 110m hurdles, hammer throw and high jump.

Maybe is for the colourful and very fluid graphics, maybe because I still remember all the times spent playing it with my fiends as some of the funniest moments of my life, but for me Hyper Olympics is still a hyper-valid game, easy but longeve and funny to play even after more than 30 years.

As in Hyper Sports, in Track & Field there’s no way to chose the difficulty level but you have to enter all the events. You can advance time after time beating the qualification time (or lenght, or height) and once you finish all 6 events you will start again at medium level. The game ends after the third level, the hard one.

The importance of this game stands in the way it redefinites a genre, the olympic one, giving it new lifeblood and an incredible success, as we can see from the plethora os sequels, spin-offs and clones.

Here are some screenshots of the game: 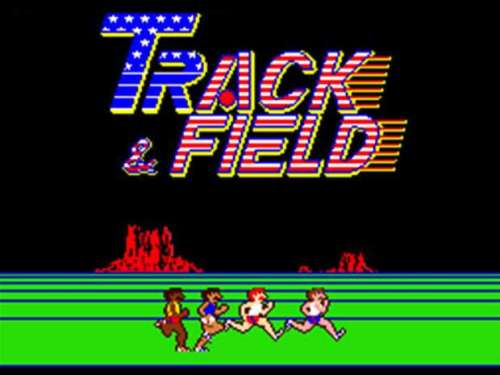 I’ve always found quitefunny and stupid the unit of measurement of the game. Who the f**k have ever used cm/second???

A huge thanks, as always, to the guys of Arcade Museum.

If you liked this game you can also try: