You can watch this playthrough on my Youtube channel I

Old Games! along with the other parts and great stuff about our loved vintage video games. Subscribe to the channel!!!

Hello everybody. This is the second part of my new playthrough adventure, this time dedicated to the immortal graphic adventure branded LucasArts Maniac Mansion: Day of the Tentacle which saw the light in 1993, sequel of the other everlasting adventure Maniac Mansion.

Here’s the second part of the video-solution you can also find on I ❤ Old Games! Youtube channel:

Hoagie is in the colonial age. He has to go to the big house in front of which he can find the letterbox with a letter encouraging to go to Batimore. It will be useful later. 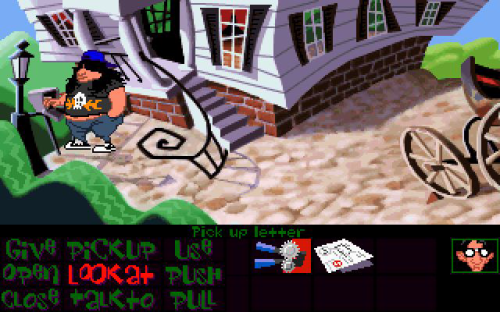 Remember: always pick up EVERYTHING!

Inside the house Hoagie has to go to the clock to reach Red Edison Lab and give him the plans for the Super Battery. What he needs is gold, oil and vinegar. He has also to pick up the hammer he finds on Red’s desk. Hoagie starts to explore the house and goes on upper floor. The first door leads directly to George Washington’s spartan bedroom.

Hoagie has to use George’s bed and call the lady to clean it.

Now he has a couple of seconds to leave the room and close the door behind him. From the lady’s cart he has to steal the soap, then he cas explore the other rooms. The second one has Betsy Ross inside, busy trying to prepare the flag and slowed by the many amendments the Fathers propose. It’s not the time to talk with her now. 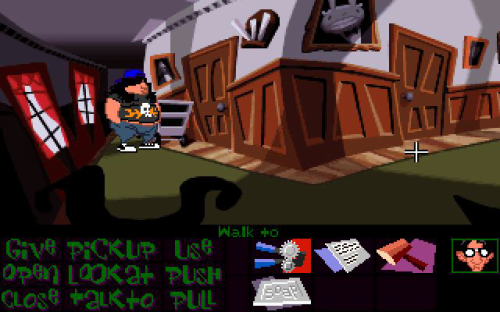 The third bedrooms is Benjamin Franklin’s one where Hoagie has to pick up the bottle of wine.

Going again upstairs Hoagie finds the room where the sons of Red Edison are busy to create a statue. The two twins are one left and one right-handed.

Hoagie has to exchange the sculptor’s hammer with the one he stole from Red’s lab, the see what happens… 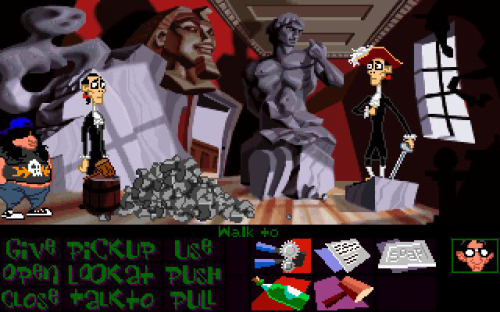 Yes, everything is destroyed and in the same time the statue in one of the rooms in the future (actually in Bernard’s present) changes.

Hoagie proceeds in the direction of the roof and he finds a small room with Ned and Jed’s beds. There’s one thing to do, the one that took me most of my time since I didn’t catch it at first: use the squeaky mattress with Jed’s bed

This way, when Hoagie uses the (now) squeaky bed and the cat come to see what happens, he has the time to pick up the squeaky mouse toy. It will be important at the end of the game.

Now Hoagie has to go down the chimney in the big hall where he finds three key-figures of american history: John Hancock, Thomas Jefferson and George Washington. As Hoagie talks with George he remember the time he chopped the cherry tree. Unfortunately there are no cherry trees around to show Hoagie his skills… 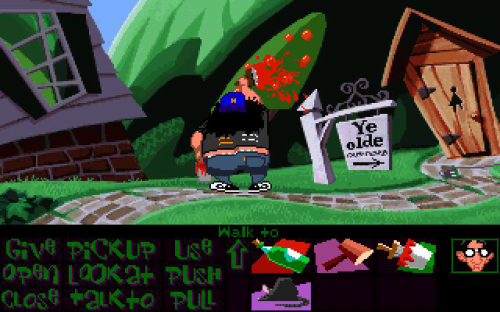 Now Washington can show him one of the legends (or not?) that made him famous…yes, except for being the first US President…

The tree disappears and she is now free to move. Pity that the guardian tentacle is there waiting to catch her. 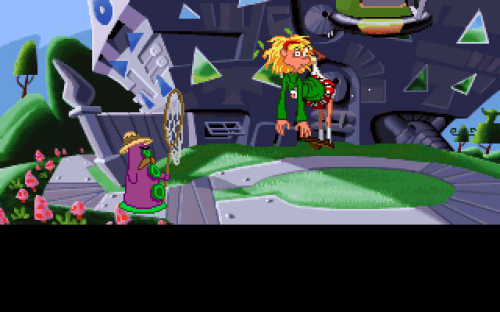 Hoagie’s saga for now it’s over and he can congratulate with George Washington: he’s quite a man!!!