You can watch this playthrough on my Youtube channel I

Old Games! along with the other parts and great stuff about our loved vintage video games. Subscribe to the channel!!!

Hello everybody. This is the first part of my new playthrough adventure, this time dedicated to the immortal graphic adventure branded LucasArts Maniac Mansion: Day of the Tentacle which saw the light in 1993, sequel of the other everlasting adventure Maniac Mansion.

Here’s the first part of the video-solution you can also find on I ❤ Old Games! Youtube channel:

The introduction of the game, one of the greatest ever made (it’s not a coincidence that DOTT has the signature of George Lucas), show our two tentacles, Green and Purple, created by Dr. Fred Edison approaching the small stream where the Slug-O-Matic is throwing toxic waste. In his power trip the evil Purple tries to drink the slime. This shouldn’t be a good idea, right?

After this, Purple starts to feel very bad, like a thousand bombs are exploding in his stomach (assuming that he has a stomach) and immediately from his slimy body pop up two small arms. Nothing special but in his infinite stupidity this gives him the conviction he can TAKE OVER THE WORLD!!!

The bad news reach Bernard Bernoulli in his house, that he shares with the rock-maniac Hoagie and with the graduand Laverne. For the first time after years he’s persuaded to go back to the mansion and try to help Dr. Fred to stop the diabolical plans of Purple tentacle. 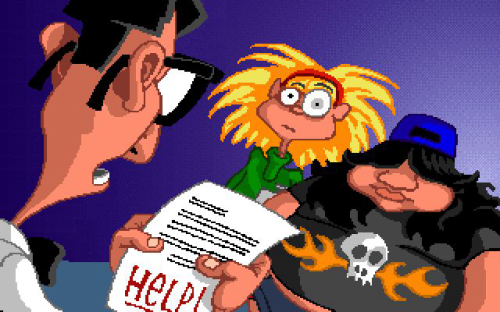 After an incredible trip, during which they also give a lift to a cow (it’s true!) they finally reach the motel where Dr. Fred has his own laboratory. The problem is: where’s the lab?

Yes, it’s there, just inside the granfather’s clock.

Inside the lab, Bernard finds out Green and Purple bonded to the Slug-O-Matic and in the name of the close friendship that ties himself to Green, he frees them.

But here’s the problem: now Purple is free to look after his plan to conquer the world. The only way to stop him is to go back in the past using the very last Dr. Fred invention, the Cron-O-John: with this time-traveling toilet Bernard, Hoagie and Laverne can go back to the day before, turn off the Slug-O-Matic and prevent Purple to dring the slime.

But something goes wrong: Dr. Fred for his time machine used a fake diamond that falls into thousand pieces after a few seconds. Now our three friends are sailing through the time.

Here’s what happens: Hoagie is thrown 200 years in the past, during the colonial ages…

…Laverne ends up 200 years in the future, in a distopic tentacle-run universe…

…and Bernard comes back to the present.

Now there’s only one thing he can do to bring back his friends to the present: give them a battery they can plug to their Cron-O-Johns to start them again for coming back home. The problem is that Dr. Fred doesn’t remember where he left his plans to build his Super Battery and it’s Bernard turn to help him finding them. Luckily it’s an easy job, since the plans are clearli on the To Do dashboard near the Slug-O-Matic.

But again Dr. Fred in his immense stupidity completely forgot the exact quantities of each ingredient he needs t build the battery. There’s nothing to do: you have to have the original DOTT handbook to discover them. Unfortunately I didn’t have it so when I played DOTT the first time I spent two days writing all the possible combination for every single patent number. This is the (in)famous Copy Protection seen in other games of early 90’s.

Once you finally set the right amount of oil and vinegar and the correct number of croutons, Bernard and Dr. Fred can send the plans through the time to Hoagie.

Now it’s his turn and his statement is quite eloquent: from here the REAL adventure begins.