I wouldn’t swap the era I competed in for anything, not a day of it

Let’s go back to the Eighties, during the ages of USA boycott and USSR counter-boycott of the Olympic games of 1980 and 1984. Daley Thompson was a bright star in the firmament of Decathlon and since he was english he didn’t care about the absence of USA and USSR. Maybe for this reason but surely not only for this reason he won two gold medals in the two editions of the Olympic Games and after these succesful campaigns, Ocean Software had the idea to dedicate him one of them masterpieces, Daley Thompson’s Decathlon.

I had the Spectrum version and unfortunately I played it only a couple of times but enought to become one of my favourite ZX games. Plus, it was one of the two-three games I’ve ever played featuring the pole vault, one of the disciplines I loved the most.

When it was issued, the game collected a lot of enthusiastic critics and I always linked it to one of my favourite comedies of all time, “See no Evil, Hear no Evil”; it’s possible that parte of the success of the immortal Richard Pryor came to the black-mustachioed athlete?

This was one of the few games I could succesfully run on the famous old ratty ZX my uncle borrowed me during my kindergarten’s days (one of the other one was PSSST!) so Daley has a warm and comfortable place inside my heart.

The coloured splash screen is a great intro for the game and it’s a copy of the cover of the cassette. I think the ZX one is probably the best among the three, being the C64 too “dusty” and the CPC too stretched. 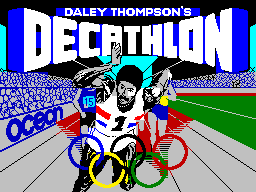 After this another screen that can break the heart even nowadays. Choosing the name!

The Spectrum version of the game I thikn it was revisited by some racist censor since Daley Thompson became white! Apart from this the game shows a good design (even though this time it’s definitely better the Amstrad version) and a very fluid graphics that owes a lot to Track & Field (a.k.a. Hyper Olympics) the northern star of olympics videogames of the Eighties. 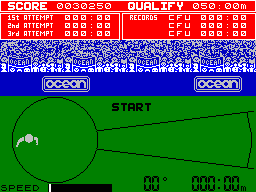 Daley was one of the joystick killer games since in every discipline the key is to be as fast as possible to press the buttons left and right to increase the speed. On a keyboard such as the one of the Spectrum, you can imagine how easy is to blow the left and right arrows. The ten disciplines are divided in two days, five events each day and you’ll perform 100 metres, long jump, shot put, high jump, 400 metres, 110 hurdles, pole vault, discus, javelin and 1500 metres.

The players starts with three ups and will lose one everytime he fails to qualify to the next discipline. Once you reach the final one, 1500 meters, the game starts again with an increaded difficulty level, so the game goal is mainly to finish all 10 events and subsequently to try to beat all the records.

The classic rough but so lovely sound of Spectrum……every event is introduced by a shord jingle while at the end of the game you can hear the famous “Chariots of Fire” by Vangelis, one of the best soudtracks ever made, even though not for the Spectrum, but for the namesake 1981 movie.

As it happens for other olympics video games, even Daley has a great replayability