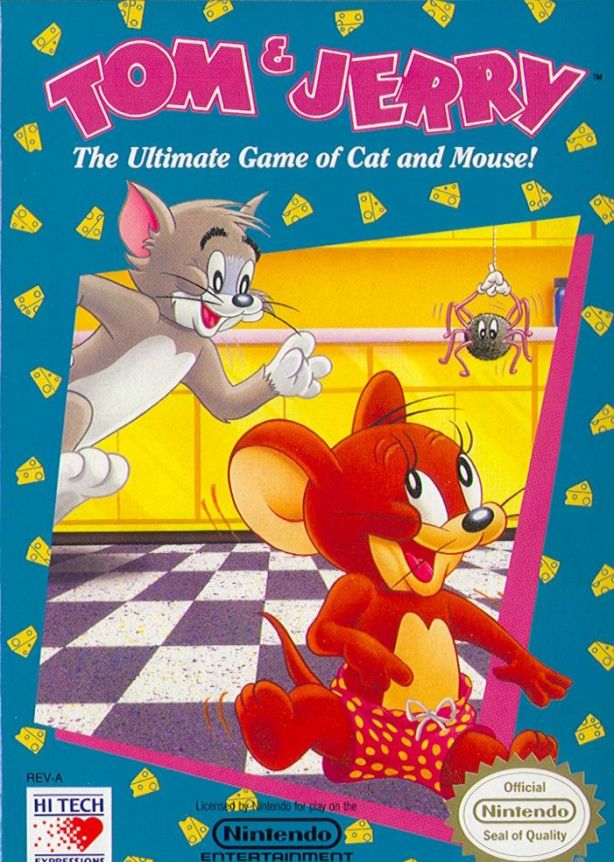 Watch out for hidden dangers and surprises…especially Tom!

I’ve always been a Tom & Jerry fan. I used to wach a trilion times every single episode every time it was airing on TV and now that I grew up…I have all the episodes in a couple of DVDs. For this reason, Tom & Jerry (and Tuffy) has a particular place in my heart. After Super Mario Bros. 3 and along with Jackie Chan’s Acion Kung-Fu is the game I played the most during my youth. BUT I finished only a few years ago using an emulator 😦

NES was like that: you need tme to play a game and you have to be skilled enough since you don’t have the possibility to save and restore the game. And since it wasn’t very wise to keep my NES on all night long, every time my dreams to finally beat the game hopelessly vanished.

As you can read in the intro, I’m very tied off to T&J. I don’t know if some of you ever played it and sincerly I don’t even know if it was a success or a fail in video games history: for me it will always be a masterpiece in my collection.

Bad news. The splash screen, with its dark background and poor-colored intro is definitely not one of the besty ever seen on NES. Alse there aren’t no options to choose and nothing to do except pressing start to begin to read the plot. It would have been better to spend a bit more time giving the game a better intro but it’s ok. We are not perfect.

Tom & Jerry is not a game developed and published by Nintendo but the graphic department is comparable and actually on the same level of other NES titles. The game atmosphere is always quite dark, especially for the first levels, but approaching the end when the action moves inside the house and on open air the thing starts to get better.

Tuffy has always been a side character in the adventures of Tom & Jerry; he’s Jerry orphan nephew and appears sometimes in the cartoons always giving his uncle a lot of trouble. In this game however, Tuffy is the main character and the story revolves around him. He’s been kidnapped or, using the word we can see in the intro mouse-napped, by Tom who locked him up in the attic. Now the ball is in Jerry’s court and his adventure should begin: starting from the mouldy (or moldy for my US readers 🙂 ) cellar, passing through the water pipes, the kitchen and all the rooms of Tom’s house he has to reach Tuffy and free him.

Tom & Jerry is a big climbing from the basement to the top of Tom’s house. In every world Jerry will find a lot of enemies, such spiders and fleas in the cellar, squirrels and bugs inside the tree, toy soldiers and strange gumballs in the living room etc… The goal for Jerry is also to collect cheese pieces to gain extra lives, very important when you are approaching the highest floors of the mansion. To defeat the enemies, Jerry can use an unlimited reserve of marbles but on the way he will find also other “weapons” such as an hammer and a marvellous spit that can kill the enemies at first hit.

The game is very linear, not too easy, not too hard and has five world with three levels each, for a totale of 15 stages; as always at the end of every world you have to defeat a boss (Tom itself) who will be tougher approaching the end.

The immortal Tom & Jerry music is the obvious soundtrack of this game. So nothing new, but even if heard a million times, the theme is always an evergreen and deserve a 10/10.

The key point in the longevity of NES titles is the impossibility of saving the game. By the way, even if I had this opportunity I’m quite sure I would have spent a lot of time to complete the game. So let’s say that T&J is a medium-difficulty game that can  give you some hassle.

A game I would like to suggest to all of you that never tried it, it will be an enjoyable pastime.